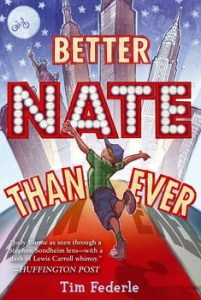 Many of the biggest lessons in my life I learned from books. Bridge to Terabithia helped me understand loss and grief. I figured out how to be a good friend and listener from Judy Blume’s novels. The Romantic Movement challenged me to be more actively present in my relationships. And from Jurassic Park, I learned never to extract dinosaur DNA from amber-entombed mosquitoes.

It’s heartening that today’s youth are embracing books like Wonder, Out of My Mind, The Thing About Jellyfish, and Eleanor & Park—novels that highlight differences and encourage compassion. I can imagine the wonderful conversations these stories are sparking, and I bet kids who read these books feel better equipped to navigate challenging situations and confront injustice. And I’m going to contend that parents and educators who buy these books for their children are doing so not only because the novels are excellent reads, but also because they recognize the potential lessons to be gleaned from the pages.

With that in mind, I ask that you put books like the following into the hands of your customers, kids, and students:

• Gracefully Grayson by Ami Polonsky
• Better Nate Than Ever by Tim Federle
• Husky by Justin Sayre
• George by Alex Gino
• None of the Above by I. W. Gregorio
• Some Assembly Required: The Not-So-Secret Life of a Transgender Teen by Arin Andrews
• Rethinking Normal: A Memoir in Transition by Katie Rain Hill
• I’ll Give You the Sun by Jandy Nelson
• Beyond Magenta: Transgender Teens Speak Out by Susan Kuklin

These are just some of my recent favorites. Goodreads offers a number of book lists featuring titles that address LGBTQ themes, like this one, and the American Library Association has recognized some truly magnificent books with its Stonewall Award.

Despite some amazing progress for LGBTQ rights, kids who identify within those groups still face big challenges at school and at home. Nine out of ten kids who identify as LGBTQ report being bullied. They’re eight times more likely to end up homeless. LGBTQ kids are four times more likely to attempt suicide than their straight peers. Nearly half of transgender youth have seriously contemplated suicide; twenty-five percent have attempted it. (More facts here.)

I’m not asking you to promote LGBTQ literature in the faint hope that young people might be more compassionate if they read these books. Studies, like those noted in this article, prove that reading makes us more empathetic. Young people who have read about Katie Hill’s decision to drop out of school and take her classes online because the bullying got so bad will be less likely to inflict the same pain on someone else. Tweens who have read Better Nate Than Ever will no doubt be sweeter to the kid who may or may not be (but who is probably) gay. Teens will realize how much they have in common with Arin Andrews after they read his memoir.

As publishers, booksellers, educators, and parents, we have this grand opportunity to shape and mold young people’s minds with the literature we give to them. I feel incredibly fortunate that my parents and educators encouraged me to read so much when I was younger—I wouldn’t be the man I am today without the books of my youth. And I wish there had been more books like the ones noted in this post when I was a teenager. As a gay kid growing up in a conservative town in the 1990s, I would have found solace in these stories, and maybe my peers would have been a bit kinder. The only gay character I knew of back then was Matt Fielding on Melrose Place. I know we can do better.

Christian Trimmer is an executive editor for Simon & Schuster Books for Young Readers. He is also the author of Simon’s New Bed and (Mimi and Shu in) I’ll Race You!, out December 2015. Learn more at christiantrimmer.com.