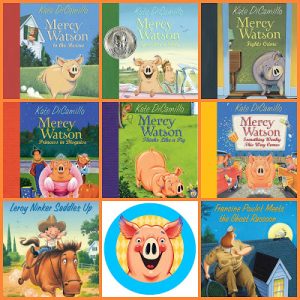 Mercy Watson, the best-selling early chapter-book series written by the two-time Newbery Medal winner and National Ambassador for Young People’s Literature Kate DiCamillo celebrates its tenth anniversary this year. Launched in 2005 the fun-filled stories aimed at readers age five to eight star Mercy Watson, Deckawoo Drive resident, lover of hot buttered toast and the most single-minded of pigs when it comes to the pursuit of adventure – and treats. Illustrated in full color by award-winning artist Chris Van Dusen in his signature retro style, the Mercy Watson books are a popular choice with younger readers making the transition from picture books to chapter books.

Although the sixth and final Mercy Watson instalment was published in 2009, the series continues to attract new fans and is published in ten languages with sales of over two million copies worldwide. Last year Kate DiCamillo reunited children with Mercy and her neighbours in the first book in her spin-off series, Tales from Deckawoo Drive. Once more illustrated by Chris Van Dusen, and with all the rip-roaring adventure of Mercy Watson, the series is aimed at older readers of six to nine. The longer chapters and fewer illustrations allow Kate DiCamillo to introduce another level of pathos and sentiment to this series of funny, touching stories starring some unforgettable, heart-warming characters.

The first title in the new series, Leroy Ninker Saddles Up, became a New York Times bestseller and Amazon Best Book of the Year. Leroy and his rusty rather than trusty steed Maybelline star in this love story bursting with impassioned declarations and plenty of hilarious horsing around. This summer saw the release of book two, Francine Poulet meets the Ghost Raccoon, which also joined the New York Times Best Seller list earlier this month. Francine Poulet is the greatest animal control officer in Gizzford County – but it looks like she may finally have met her match. Funny, fast-paced and with an empowering message at its heart, readers are reunited with some familiar characters amid some riotous raccoon wrangling!

Tales from Deckawoo Drive is the perfect follow-on for original  fans who grew up with Mercy Watson and are ready to move on to a longer read. And for those readers new to Deckawoo Drive, this series is a wonderful introduction to a warm and witty world where readers are left feeling all buttery-toasty inside.

DON’T MISS Kate DiCamillo in a LIVE national author webcast. The live event will take place on 10/15/15 hosted by Pittsburgh Arts & Letters as part of the ‘Stories Connect Us’ community reads program. The live streamed event is FREE and open to classrooms as well as the general public. Join Kate for a virtual discussion of the Mercy Watson series and the continuing stories of Deckawoo Drive with young readers. Find out more at www.katedicamillolive.com.

Praise for the new series, Tales from Deckawoo Drive

“. . . Successfully expands the core of the Mercy Watson series while offering generous cameos from the original characters, as well as much buttered toast. No one offers early readers better quality prose than DiCamillo, who never allows the constrictions of this format to deter her from excellent writing. Series illustrator Van Dusen’s artwork is a treat, as always, reflecting the quirkiness of DiCamillo’s unique cast of characters.” Booklist, starred review

Kate DiCamillo is the beloved and renowned author of many books for young readers, including Flora & Ulysses: The Illuminated Adventures and The Tale of Despereaux, both of which won Newbery Medals, as well as the best-selling Mercy Watson series. In 2014 she was named the National Ambassador for Young People’s Literature. She lives in Minneapolis, where she faithfully writes two pages a day.

Chris Van Dusen is the creator of many outstanding books for children, including Randy Riley’s Really Big Hit, King Hugo’s Huge Ego, The Circus Ship, and many others. He is also the illustrator of all six books about Mercy Watson and it’s spin off series, Tales from Deckawoo Drive. Chris Van Dusen lives in Maine.