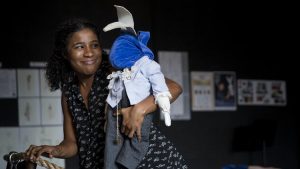 The play—which stars Jessie Fisher, Melanie Brezill, Kelvin Roston Jr., and Patrick Budde—will premiere at The Ruth Page Center for the Arts on October 23, 2015. DiCamillo was inspired to write the novel when she was given a china rabbit doll.

On the third night I had him, I had this dream where he was underwater and he doesn’t have any of his clothing on — just your standard naked rabbit dream that all writers have. I initially thought it would be a picture book, but when I started writing, it just unfurled and wrote itself. The story told me; I didn’t tell the story. (Chicago Tribune)