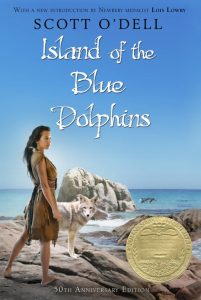 I watched Mad Max: Fury Road this past weekend, and it was awesome. And not just because it’s a completely over-the-top, action-packed, ABSOLUTELY insane movie. It also features six diverse, unique, strong, and compelling female characters along the ride, each one more interesting to me than the male lead. (I still love Tom Hardy though.)

Watching this movie reminded me of what a gift a truly GREAT female character can be and of the importance of celebrating strong, diverse, and powerful females in any entertainment medium when we’re offered such opportunity.

So I wanted to use this forum to express appreciation for some of my favorite diverse leading ladies in YA lit, specifically because I don’t think we take enough time to give them props!

Island of the Blue Dolphins by Scott O’Dell (character: Karana)

I will confess that not every book I was assigned to read in school resonated with me (Sorry, Old Man and the Sea). But this book has had a permanent place in my heart since the 4th grade. Karana is a badass. Abandoned by her people and left to fend for herself and her little brother following a series of tragedies, Karana displays an astonishing and relentless strength and courage of character, while retaining a very true and heartbreaking relatability throughout. My suburban, Midwestern upbringing did not stop me from finding one of my early role models in this fantastic Native American character.

The Walled City by Ryan Graudin (characters: Jin and Mei Yee)
I read this while working at Little, Brown Books for Young Readers, and could not put it down. It’s so, so fantastic, thanks in large part to Graudin’s flawless characterization of sister protagonists Jin (a girl disguised as a boy, on the run in the most dangerous city in the world) and Mei Yee (the sister Jin is desperate to save). Jin displays a toughness and ruthless strength from the start, while Mei Yee has a quieter, more refined sense of endurance. This is a compelling YA novel that displays female strength in two very different (but equally compelling) forms. Read it now.

Potentially unpopular opinion: Katniss Everdeen, the lead of The Hunger Games, isn’t the most impactful character in this novel. Rather, the true gem in Suzanne Collins’ novel is Rue, the 12-year-old tribute from District 11 who is thrust into the titular games alongside Katniss. Rue is incredibly brave despite her size, while retaining an endearing sweetness and goodness that makes her story all the more tragic. Though her role is brief, her legacy looms large over Katniss throughout the series for a reason.

Daughter of Smoke and Bone by Laini Taylor (character: Karou)

I love this book because Taylor is one of those amazing YA writers who pulls no punches: just running with a complex and layered plot, and respecting her readers to keep up the pace and hang on tight. The protagonist of this novel, Karou, is one for the ages. As a human with a fantastical genetic pedigree that even she doesn’t understand, Karou is compelling because she’s very human despite her uniqueness. A typical teen in many ways, Karou is instantly relatable but has an underlying strength that becomes clear when she’s thrust into a world that demands more sacrifice and bravery than anyone deserves. And she has killer hair.

All of these women (and I am just scratching the surface of my personal faves!) represent a variety of cultures, backgrounds, challenges, and types of strength. In a world where so many women are often sidelined and pigeonholed in set roles in society (though we have made progress), aren’t these gems something to celebrate?