Home > Blog > It Will Take a Village… 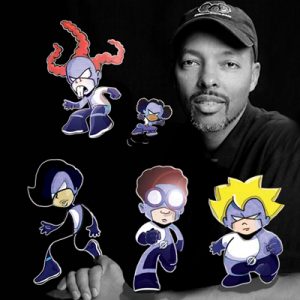 In 1992, I created a comic strip called Mama’s Boyz because there were so few that starred black characters. It was picked up by King Features and distributed weekly to close to 900 papers for almost 20 years.

In 1995, I sent a Mama’s Boyz book sample to several publishers. And they sent them all back. One editor even added a note saying that they, “would NEVER be interested in my black-sitcom style of humor.” It wasn’t just THAT they rejected my work. It was HOW they did it. So I changed my goal.

Note to self #1: Avoid publishers!

In 1997, I self-published, Mama’s Boyz: As American as Sweet Potato Pie!, but even though it had a foreword by one of the most famous cartoonists in the world, Lynn Johnston (creator of the popular For Better or For Worse) and I had received some pretty good press in mainstream publications, my customers were still 99.9% African American boys.

But it still did pretty well. As a result, a few years later, I got a call from Alex Simmons, who had written comic books such as Archie, Batman, and Scooby Doo. He pitched a series of graphic novels based on historical African-American figures to a major publisher, and they wanted me to illustrate them. I was thrilled! But just as it was gathering steam, our editor (African American) left the company and the project fizzled out.

In 2007, I published my second book Mama’s Boyz: Home Schoolin’. And it wasn’t until a librarian in Stamford, Connecticut, GAVE out copies to her reading group, that I realized that other kids could actually enjoy my work too. I mean boys AND girls. Black, white, Latino, Asian… In fact, my biggest fans turned out to be two sisters of Indian ancestry. “I would have never bought this book for my daughters,” their mother told me, “but they absolutely LOVE it!” This made me realize that it wasn’t the kids who didn’t want my book, it was the parents who didn’t want their kids to want my book. The school book fairs where I sold the most, were the ones where the kids had their own money, and mom and dad were nowhere to be found.

Note to self #3: Avoid parents!

One day at a book festival, an adorable little blonde cherub around five years old grabbed a copy of Please Don’t Yell at We!

and ran off as fast as she could. Her mother demanded that she bring the book back. She refused, hiding it behind her back. She REALLY wanted that book. Seeing me watching, the woman promptly walked over to her daughter, whispered something, and pointed to me. The girl quickly, and sadly, handed over the book, which she then put back on my table.

Note to self #4: UGH! I only have two stupid rules and I keep breaking them. See Note #3!!! No wonder no one wants to publish you!!!

Fast forward to 2013, when I wrote my first middle-grade novel The Offenders: Saving the World While Serving Detention!,

the story of five middle-school bullies (three boys and two girls of different ethnicities) who gain super powers. But instead of transforming into cool superheroes, they are forced to take on the characteristics of the kids they pick on. Now they’re the ones who are being teased, and by the same kids who they are trying to help! I even hired my own two teenage sons as co-writers to make the dialogue more believable.! This time, I chose to only put silhouettes of the characters on the cover to see if that would impact sales. After all, over the years, I saw firsthand how trying to get people to stop at a table full of books with brown faces is like trying to drag a boy down the doll aisle at Wal-Mart

Now that I had the book, I needed to do something different at the book fairs, starting with my appearance. My wife and I came up with “The Uniform.” My Mama’s Boyz sweatshirt was replaced by a buttoned dress shirt; no sunglasses; no baseball cap; definitely no hoodie. I even shaved off my goatee and left only my mustache. And as far as the table goes, I would ONLY put out The Offenders. During my next two events, where I normally did poorly, The Offenders was one of their best sellers! I even had a few schools order them in bulk to teach their kids about bullying.

In late 2013, Scholastic offered me the opportunity to illustrate The Zero Degree Zombie Zone, written by Patrik Henry Bass and edited by Andrea Davis Pinkney.

What I loved about The Zero Degree Zombie Zone was that even though the four main kids are black, it wasn’t boxed in as “a black book.” I suddenly reached a whole new level of exposure, attending my first ever signing at BEA and a ton of other great events, including the National Book Festival in Washington, DC. I was even reimbursed for gas! Then one day I checked the mail, and there was a pin and a certificate from the Junior Library Guild. Wow!

And now, I’m proud to announce that I am currently working on a yet-untitled graphic novel to be published by another major publisher in 2017. It’s the story of Jordan Banks, an aspiring artist whose mom makes him go to a prestigious prep school instead.

I’d like to leave you with a few suggestions for those of us who REALLY want to see more diversity in the children’s book industry:

PUBLISHERS:
• Hire people who know how to find diverse talent and content. I would have never gotten to do the Scholastic book if not for Andrea Davis Pinkney.
• Look for people who have a proven track record, and give them the freedom to bring THEIR ideas to life. People like Wade and Cheryl Hudson, Eric Velasquez, Zetta Elliott, Shadra Strickland… have been thriving in this industry for decades. Tap into that.
• Let diverse authors and illustrators create stories that are fun and exciting. Too many books for kids of color are biographies about slavery and the Civil Rights Movement. If the only books that white kids had were on Thomas Jefferson and Teddy Roosevelt, then maybe they wouldn’t be so excited about reading either.
• Black illustrators can draw white characters, too — we’re versatile and would LOVE to work on a major title! You don’t have to wait until you find a manuscript about a black kid to hire us. A book on George Washington Carver will NEVER sell as well as a book on George Washington. And a book on George Washington will NEVER sell like Diary of a Wimpy Kid.
• If you’ve done a book starring a character of color before and it didn’t do well, plea
se don’t say, “Well, we tried it and it didn’t work, so let’s never do that again.” Maybe it wasn’t the right book! White books fail all the time, but you keep making them.

WHITE PARENTS:
• If your kid wants a book that stars people of color, let them get it. It won’t hurt them.

BLACK PARENTS:
• Our friends give our kids books starring white protagonists all the time, but we never give THEIR kids books starring kids of color. So start!
• Sales are like voting; every one counts. So if you see authors who make the kinds of books that you think are important to your kids, please support them. And ask your library to order them as well.

GATEKEEPERS:
• You have an enormous effect on book sales. I know librarians who ONLY order books that get great reviews from 2 or 3 publications. Find that Little Engine That Could, and give it a push.
• Use reviewers who get it. You can’t send a vegetarian to review a steak house. So stop.
• Include diverse books in discussions with other books on the same topic. Books like The Offenders should be discussed alongside other books on bullying or superheroes.

SCHOOLS:
• Include our books in your class reading lists. It will have an enormous impact — and not just on the kids of color. Black authors are like the Whos in Horton Hears a Who: “We are here! We are here!” If the only time your kids see an African American is on the news, in sports, or in movies, they are already forming detrimental opinions that they will carry into adulthood.
• You don’t have to wait until Black History Month to invite us to do a school visit. We have the same impact in October, or May, or even November!
And last but definitely not least,

AUTHORS FOR DIVERSITY:
• If you’re writing about characters from backgrounds that you know nothing about, do the research. For The Offenders, because one of the characters is adopted, I interviewed parents who had adopted kids from other cultures. For the Latino boy, I let my Latino friends critique it.

Jerry Craft has illustrated and written close to two dozen children’s books. He is the creator of Mama’s Boyz, a comic strip that was distributed by King Features for almost two decades, making him one of the few syndicated black cartoonists ever. He has won five African American Literary Awards and is currently working on a graphic novel for early 2017 release. Visit his website at www.jerrycraft.net, and follow him on Facebook and Twitter. He can be contacted at [email protected]