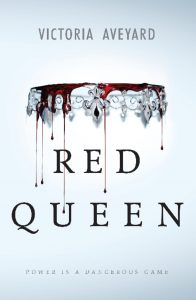 Book one in the newly signed two-book deal, set to publish in 2018, will be the fourth installment in the epic Red Queen series, which focuses on a world divided by blood. Those with Red blood are commoners and serve the Silver-blooded elite, who have been gifted with superhuman abilities. Mare Barrow is scraping by as a thief until a twist of fate throws her in front of the Silver court, where she discovers she has an ability all her own—even though her blood is Red. The second book in the deal, a to-be-determined novel, is scheduled for release in 2019.

“Victoria Aveyard burst onto the scene as the only first-time author to debut at #1 on the New York Times Young Adult bestseller list,” said Suzanne Murphy, President and Publisher of HarperCollins Children’s Books. “We are enormously proud of her success and are thrilled to make HarperCollins her home.”

Kristen Pettit adds, “Victoria Aveyard’s talent is immense, undeniable, and extremely rare. Her scenes leap from the page and immerse you in her intricately wrought world. I am thrilled to continue to work with Victoria to bring her particular brand of gripping, visceral prose to readers everywhere.”

The highly anticipated second novel in Aveyard’s Red Queen series, Glass Sword, will publish February 9, 2016, with the third novel to follow in 2017. In addition, two e-novellas set in the Red Queen world, Queen Song and Steel Scars, are set to release September 1, 2015, and January 5, 2016, respectively. Red Queen has sold into 31 territories and is already a worldwide bestseller. Finally, movie rights for Red Queen were sold to Universal Studios. Gennifer Hutchison (Breaking Bad) penned the script and Elizabeth Banks is in talks to direct.

Victoria Aveyard is the #1 New York Times bestselling author of Red Queen. Victoria was born and raised in East Longmeadow, Massachusetts, a small town known only for the worst traffic rotary in the continental United States. She moved to Los Angeles to earn a BFA in screenwriting at the University of Southern California. She currently splits her time between the East and West coasts. As an author and screenwriter, she uses her career as an excuse to read too many books and watch too many movies. She has sold several television pilots and feature-length screenplays. You can visit her online at www.victoriaaveyard.com or on Twitter at @VictoriaAveyard.