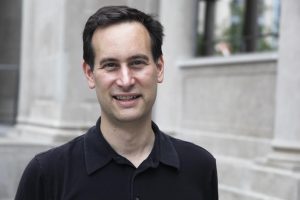 The first of two new standalone novels from Levithan—titles and publication dates to be announced—will be a sequel to his New York Times bestselling and highly acclaimed Every Day. The sequel will conclude the story of A, a character who changes bodies on a daily basis but is always in love with the same girl, Rhiannon. August 25 marked the nationwide release of Another Day, a companion to Every Day, which tells A’s story from Rhiannon’s perspective.

“David Levithan is a brilliant storyteller, respected tremendously in the industry and beloved by teens and adult readers nationwide for his intriguing plotlines and characterization,” says Cecka Nolan. “We are so pleased to continue our publishing with David, and look forward to our future collaborations.”

Knopf has also acquired two projects to be cowritten by Levithan and Rachel Cohn. The team’s first coauthored novel was the New York Times bestseller Nick & Norah’s Infinite Playlist (2006), followed by Naomi & Ely’s No Kiss List (2007)—a movie adaptation of which will premiere on September 18, 2015, starring Victoria Justice and Pierson Fode—and Dash & Lily’s Book of Dares (2010). The new novels include a sequel, THE TWELVE DAYS OF DASH & LILY, and SAM & ILSA, a story that features brother-sister twins and a fateful end-of-the-year party.

Publication of the newly announced works will commence with THE TWELVE DAYS OF DASH & LILY in fall 2016.

David Levithan is a children’s book editor in New York City, and the author of several books for young adults, including the Lambda Literary Award winner Two Boys Kissing; Every Day; Another Day; Will Grayson, Will Grayson (coauthored with John Green); and Every You, Every Me (with photographs by Jonathan Farmer). He lives in Hoboken, New Jersey. To read more about David and his work, visit his website at davidlevithan.com.

Rachel Cohn is the author of the critically acclaimed YA novels You Know Where to Find Me, Cupcake, Shrimp, Pop Princess, Gingerbread, and Very Lefreak and the middle-grade novel The Steps. A graduate of Barnard College, she lives and writes in Los Angeles. Rachel and David’s first three collaborations, Nick & Norah’s Infinite Playlist, Naomi & Ely’s No Kiss List, and Dash & Lily’s Book of Dares, are also available from Knopf. Learn more about Rachel and her work at rachelcohn.com.