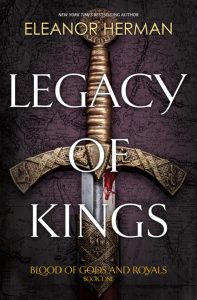 “It’s thrilling to meet these characters just as they are discovering their true identities. We’re envisioning developing this as a historically rooted Game of Thrones, but for a younger crowd,” said Towne.

“Legacy of Kings is possibly my favorite of all the books Paper Lantern Lit has helped produce,” added Oliver. “We are thrilled to work with Simon Helberg and his team to bring the story to the small screen.”

Last spring, Legacy of Kings sold just before the Bologna Children’s Book Fair in a four-book, major preempt, followed by numerous foreign sales. Praised as “genuinely sexy” (Kirkus Reviews), and a book that “action and fantasy fans will gobble up” (School Library Journal), it arrives with advance praise from authors such as Cinda Williams Chima (The Heir Chronicles), Alex Flinn (A Kiss in Time, Beastly) and Arwen Elys Dayton (Seeker). Legacy of Kings has drawn comparisons to Game of Thrones for its use of multiple points of view and reimagining of historical events.

Legacy of Kings shares the untold story of a teenage Alexander the Great, before he was a conqueror, as he sets out on a quest to earn his father’s respect. Accompanied by a band of others driven by their own motivations, Alexander journeys to regain the Blood Magic—the only force capable of driving out an unspeakable evil that has taken root in the kingdom.

“The first time I read the Legacy of Kings manuscript I knew our team had found an extraordinary work,” said Natashya Wilson, executive editor at Harlequin TEEN. “The seamless weaving of rich historical detail, true events, fiction and magic, combined with unique characters driven into repeated conflict creates a riveting tale that deserves to be shared with a wider audience. I could not be more pleased that WB agrees.”

“I’m excited about the opportunity to work with WB to bring Legacy of Kings to life,” said Eleanor Herman. “The world of the young Alexander the Great is enthralling, rich and magical—I can’t wait for viewers to experience it on their TV screens!”

Harlequin (www.Harlequin.com) is one of the world’s leading publishers of books for women, with titles issued worldwide in 34 languages and sold in 102 international markets. The company publishes more than 110 titles monthly and more than 1,300 authors from around the world. Harlequin is a division of HarperCollins Publishers, itself a subsidiary of News Corp and one of the largest English-language publishers in the world. Harlequin has offices in 15 countries, including offices in Toronto, New York and London. For more information, please visit Harlequin.com and Facebook.com/HarlequinBooks. Follow Harlequin on Twitter:@HarlequinBooks.

WARNER BROS. TELEVISION (WBTV) has been one of the entertainment industry’s most respected providers of original prime-time programming since its founding in 1955. For the 2015-2016 television season, WBTV is producing more than 30 prime-time series, with shows on each of the five broadcast networks, in addition to cable’s HBO, TNT, Cartoon Network’s Adult Swim and Showtime. WBTV’s continuing broadcast network series include the hit comedies 2 Broke Girls, The Big Bang Theory, Mike & Molly, Mom and Two and a Half Men, as well as dramas The Mentalist and Person of Interest for CBS; comedies The Middle for ABC and Undateable for NBC; drama The Following for FOX; and six dramas for The CW: The 100, Arrow, Hart of Dixie, The Originals, Supernatural and The Vampire Diaries. New broadcast network series include the dramas Gotham for FOX, The Flash and iZombie for The CW, Stalker for CBS, The Mysteries of Laura and Constantine for NBC, and Forever for ABC, as well as comedy One Big Happy for NBC. For cable, WBTV produces The Leftovers and the upcoming Westworld for HBO, Major Crimes for TNT and Shameless for Showtime, and distributes the two-time Emmy® award–winning Childrens Hospital and Newsreaders to Adult Swim. Additionally, WBTV is producing the forthcoming event drama series 11/22/63 for Hulu.

Paper Lantern Lit is a boutique literary development and production company run by award-winning poet and YA author Lexa Hillyer and New York Times bestselling author Lauren Oliver. Since its launch in 2010, Paper Lantern Lit has developed and sold more than forty properties to major commercial publishers such as Penguin, Random House and HarperCollins, as well as published a curated selection of teen, new-adult and genre titles through their e-first initiative, The Studio.