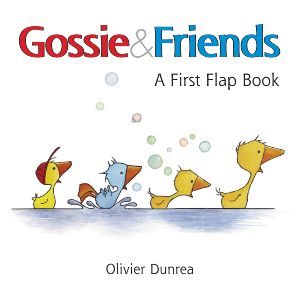 BOSTON, MA — (HMH) (NASDAQ: HMHC) and national public media producer WGBH today announced a co-production agreement for the creation of a television and cross-platform series based on the Gossie & Friends book series, published by HMH and written and illustrated by Olivier Dunrea. HMH and WGBH will partner to pursue a domestic broadcasting arrangement for the series, as well as international co-production financing. The series will emphasize social emotional learning, which is a critical curriculum area for the preschool audience of two-to-five year olds.

With more than one million copies sold globally across all formats, the Gossie & Friends series is the story of a band of inquisitive goslings who navigate common childhood concerns, such as new siblings, sharing, and lost toys. Launched in 2002 with the publication of Gossie and Gossie & Gertie, the series has since grown to nineteen titles, has been reviewed by, the New York Times Book Review, and the , among others, and been recommended by as a “must have” book for babies.

“This cross-media co-production arrangement – a first for HMH – underscores the Company’s expansion into children’s media production,” said CJ Kettler, Executive Vice President and Chief of Consumer Brands and Strategy for HMH. “Our position in the marketplace as an award-winning provider of acclaimed children’s books, as well as our early learning educational expertise, provides us with a unique advantage in children’s media and entertainment.”

“Bringing books to life through video and new media is a unique talent of our award-winning creators and children’s producers at WGBH,” said , WGBH Vice President for Children’s and Educational Media. “We are delighted to bring the gentle and timeless world of Gossie and her friends to a broad audience of preschoolers, who, like these goslings, are experiencing first lessons in the art of friendship and thriving within a community.”

“As one of our most celebrated children’s titles and characters, Gossie has brought joy to young learners all over the world,” added , President, . “We are thrilled to extend the relationship we’ve enjoyed with WGBH on Curious George and to a co-production partnership, bringing the world of Gossie & Friends to life in media.”

For more than 40 years, WGBH has been committed to harnessing the power of media to benefit the nation’s children, addressing unmet educational and social needs with high-quality content for broadcast and new digital media. WGBH’s renowned and celebrated children’s series include Arthur, Curious George, Between the Lions, , Fetch with Ruff Ruffman, Design Squad and the multi-media series all for , and PEEP and the (TLC), and (Discovery Channel Kids). WGBH currently has a pilot in development with for the popular children’s book series Pinkalicious.

Gossie & Friends creator Olivier Dunrea is an award-winning children’s book writer and illustrator, painter, and sculptor; his work centers around farms, animals, architecture, and folklore. He lives in the village of , in the . For more information on the series, visit gossieandfriends.com.

WGBH Boston is America¹s preeminent public broadcaster and the largest producer of content for TV and the Web, including Frontline, Nova, American Experience, Masterpiece, Antiques Roadshow, Arthur, Curious George and more than a dozen other prime-time, lifestyle, and children¹s series. WGBH also is a major supplier of programming for public radio, and oversees (PRI). As a leader in educational multimedia for the classroom, WGBH supplies content to PBS LearningMedia, a national broadband service for teachers and students. WGBH also is a pioneer in technologies and services that make media accessible to those with hearing or visual impairments. WGBH has been recognized with hundreds of honors. More info at www.wgbh.org.

(HMH) (NASDAQ:HMHC) is a global learning company dedicated to changing people’s lives by fostering passionate, curious learners. As a leading provider of pre-K-12 education content, services, and cutting-edge technology solutions across a variety of media, HMH enables learning in a changing landscape. HMH is uniquely positioned to create engaging and effective educational content and experiences from early childhood to beyond the classroom. HMH serves more than 50 million students in over 150 countries worldwide, while its award-winning children’s books, novels, non-fiction, and reference titles are enjoyed by readers throughout the world. For more information, visit www.hmhco.com.