Home > Blog > The Importance of Giving a… 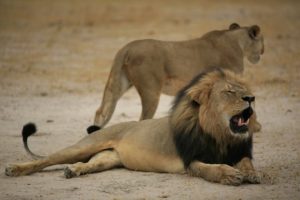 Confession: it takes a lot to make me cry.

It’s not that I’m not an emotional person, or that if I’m having a drink with you and your heartbreaking story doesn’t bring an immediate tear to my eye that I’m not moved. I just don’t do the whole crying thing (complete with pretty tears) very often. I have consistently tested as a “Thinker” (as opposed to “Feeler”) on the Myers Briggs’ personality test, so I tend to digest and process most life experiences and the sad things I see in the world logically. While I do get upset from time to time, I muddle through life for the most part with dry eyes.

That said, when it happens, it’s never pretty.

When the world of social media blew up last week with the details following the death of poor Cecil the lion, I was amazed at how much of a strong, visceral reaction I had to the entire situation almost immediately. I’m talking ugly crying – angry tears. It…wasn’t attractive.

Here was an animal I didn’t know (my only encounters with lions being at the zoo behind glass walls), and yet the reaction I felt was almost as if this animal was a close, personal friend. The logical part of my brain reasons it quite simply.  Here was a beautiful, majestic fellow creature in the world, one who inspired and delighted generations, served as an invaluable research subject for the University of Oxford, and brought in needed wealth and support for Zimbabwe, all sacrificed for the benefit of one man’s ego. Cecil’s life ended horribly, and there was no one there to protect him, to speak up for him, or to save him in the end.  And that made me very upset.

Why am I talking about this on a diversity blog? Because in the midst of this horribly sad story, there emerged a small silver lining that I think pertains to the diversity conversation. Following Cecil’s death, there was an incredible, powerful, and immediate wave of support for the poor creature that emerged from humans worldwide. From financial donations (almost $500,000 raised within 48 hours after the story broke), to social media outrage, to petitions and movements demanding both justice for Cecil and protection for his pride, it was incredible to see just how quickly humankind jumped in line to offer a voice for a fellow creature who suffered in silence.

As human beings, we often take for granted just how powerful our voices can be when used effectively. For Cecil, the way supporters’ voices compounded offered just a little bit of positivity amongst what was otherwise a completely horrifying situation.

Within our industry alone, there are many voices that need this sort of positive, unwavering, and inspiring support on a regular basis. Think of the teen who is coming to terms with his sexuality for the first time in a high school where those who don’t fit the status quo are ostracized and targeted by bullies. Or the little girl who is attending her first day of school where she doesn’t quite look like everyone else and doesn’t know how comfortable she feels speaking up in class. As publishers, authors, booksellers, librarians, and book lovers alike, it is vital to celebrate, promote, and fight for a world that offers a voice to those who feel voiceless, and support for those who need it most.

How can we do this? By publishing books that cover the entire spectrum of the human experience and more accurately reflect the multicultural world we live in –making diverse authors, characters, and stories a constant priority at every house. By providing authors of diverse backgrounds with the necessary forums to reach those kids who need to know they’re not alone in the world on a regular basis. By partnering with local LGBTQ groups, at-risk youth programs, and other organizations to reach those kids most in need of a voice beyond their local bookstore.

Cecil’s story became a phenomenon in part due to the support and voice humankind offered a creature who couldn’t speak for himself. Can’t we do at least that much for our own kind?