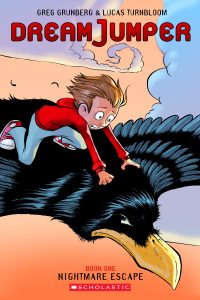 Dream Jumper, for readers ages 8-12, follows Ben, a kid who discovers he can jump into other people’s dreams—allowing him to save his friends when they start falling victim to an evil dream-monster who prevents them from waking.

“Lucas and I met at San Diego Comic-Con. We hit it off immediately and knew we wanted to create something together. When my 12 year-old son Ben described a dream he had about a boy who could jump in and out of his friends’ nightmares to help them fight off bad guys and monsters, it sounded like a really relatable and exciting world to build a graphic novel and I immediately thought of Lucas, ” said Greg Grunberg.

Lucas Turnbloom adds, “That initial brainstorming session was so full of endless story possibilities and wonderful ideas that we knew this was the project for us, and publishing Dream Jumper with Graphix is perfect because Graphix is the ultimate destination for kids and comics.”

“Dream Jumper soars from the enthusiasm of its two creators and I’m so pleased to publish this exciting adventure story on the Graphix list,” said David Saylor.

In addition to his work in entertainment, Grunberg created Yowza!! The free GPS-based coupon app quickly became the most popular app of its kind due to Grunberg tapping into his 1.4 million followers on Twitter as well as his many talk show and radio appearances.

Greg also started the charitable celebrity rock band “Band From TV” with fellow actors Hugh Laurie, James Denton, Jesse Spencer, Adrian Pasdar and Scott Grimes. “Band From TV” has performed all over the world as well as appearing on “American Idol” and “The Tonight Show.” Grunberg’s portion of the band’s fundraising benefits TALKABOUTIT.ORG, the foundation he started to raise awareness for people living with epilepsy as his eldest son has the condition.

Lucas Turnbloom is an award-winning cartoonist and illustrator who’s best known for his comic strip, “Imagine THIS,” which is syndicated through Universal Press/Uclick. While working for several years as a feature artist for the San Diego daily newspaper, The North County Times, Turnbloom earned 16 first-place awards for his cartoons and illustrations.

Turnbloom currently resides in San Diego, with his wife and two sons.

About Graphix
In 2005 Scholastic launched Graphix with the publication of the full-color edition of BONE #1: Out from Boneville. Graphix is dedicated to publishing engaging, age-appropriate graphic novels for children and teens. Supported by librarians, teachers, and most important, kids, Graphix titles have become bestsellers around the globe and continue to receive awards and critical acclaim including multiple Eisner Award wins and nominations, a Stonewall Book Award (Drama), a Boston Globe-Horn Book Award Honor (Smile), an Edgar Allan Poe nomination (The Lost Boy), and fifteen New York Times bestsellers to date.

About Scholastic
Scholastic Corporation (NASDAQ: SCHL) is the world’s largest publisher and distributor of children’s books, a leading provider of print and digital instructional materials for pre-K to grade 12, and a producer of educational and entertaining children’s media. The Company creates quality books and ebooks, print and technology-based learning materials and programs, classroom magazines and other products that, in combination, offer schools customized and comprehensive solutions to support children’s learning both at school and at home. The Company also makes quality, affordable books available to all children through school-based book clubs and book fairs. With a 94 year history of service to schools and families, Scholastic continues to carry out its commitment to “Open a World of Possible” for all children. Learn more at www.scholastic.com.