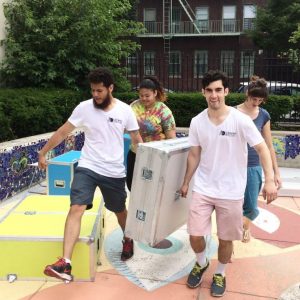 BRONX, NY – Today, the Libraries Without Borders (LWB), DreamYard, New York Public Library, and the Alexander Soros Foundation opened the Ideas Box to be used in Hayden Lord Park in the South Bronx until September 5th. Created by renowned French designer Philippe Starck, the Ideas Box is a portable media center that provides tools, such as Internet, books, tablets, and cameras, to give users access to educational and critical information.

“Originally, the Ideas Box was intended to provide vulnerable populations with access to critical information and global culture,” said Patrick Weil, President of Libraries Without Borders. “I am thrilled to see that the Ideas Box has lived up to its potential as a versatile educational tool providing a connection to a range of communities, from the remote Torres Straits Islands to right here in the Bronx.”

“At branches throughout New York City, public libraries work to provide education, opportunity and access to information for all. This Ideas Box collaboration helps us to expand that important mission by providing Bronx kids with information on our free services, and helping them access those services to strengthen themselves and their communities,” said Anthony Marx, President of the New York Public Library.

“DreamYard believes bringing the Ideas Box to the University Heights community in the Bronx will fuel young people’s excitement for creativity, storytelling, and learning,” said Tim Lord, President of DreamYard. “The Ideas Box is an important and innovative way to address the disparity in access to literacy and digital learning resources we see in too many of our communities today. The summer is an ideal time for young people to explore their interests using the arts and technology to make their dreams a reality. By providing both formal and informal programming in the park, young people will be able to impact and inspire their own communities. DreamYard is excited to partner with Libraries Without Borders and the NYPL to make the Ideas Box a catalyst for strengthening communities in the Bronx.”

“We live in an increasingly mobile society, and the Ideas Box has proven to be a tremendous tool to connect communities with the rest of the world,” said Alexander Soros, founder of the Alexander Soros Foundation. “I am glad that our partners have found a new use for the Ideas Box in helping Bronx kids continue to learn throughout the summer.”

Designed to be a mobile and flexible tool, the Ideas Box’s mission is to offer tools that help communities access information, education, and cultural resources. Whether in remote locations or densely populated areas, the Ideas Box can play a major role in spreading culture, fostering enhanced educational opportunities and enabling libraries to reach new users.

To date, the Ideas Box has been used by vulnerable populations in Burundi and Jordan as well as by aboriginal communities in remote parts of Australia. The modular device consists of six pieces that fit squarely onto two standard European shipping pallets and weighs approximately 1,800 lbs. The four main boxes include a component for laptops, a library, a cinema screen and an IT component. The other two boxes become tables and chairs.

The Ideas Box also contains its own power system including a generator and battery system for autonomous usage. The integrated circuit allows for simultaneous charging of all equipment. The net cost of producing the Ideas Box is approximately $60,000, not including the cost of deployment and the training program.