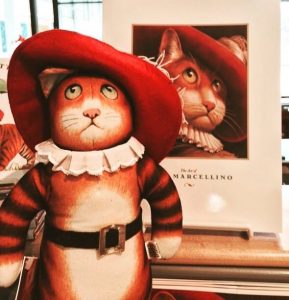 Amherst, MA — The Eric Carle Museum of Picture Book Art proudly announces its forthcoming exhibition of award-winning art and illustrations by Fred Marcellino. A Renaissance Man: The Art of Fred Marcellino will be on view from June 30 to October 25, 2015. The exhibition comprises over 90 works and shows the full range of Marcellino’s talent, from his youthful experiments in Abstract Expressionism, to his celebrated album cover and book jacket designs, to his children’s book illustrations, the crowning achievement of his career. Of special focus will be the original art for Puss in Boots (1990), for which Marcellino won a Caldecott Honor award. Other featured books will include A Rat’s Tale (1986), The Steadfast Tin Soldier (1992), The Wainscott Weasel (1993), The Story of Little Babaji (1996), The Trumpet of the Swan (2000), and Marcellino’s own I, Crocodile (1999).

Fred Marcellino was born October 25, 1939, in Brooklyn, New York, to Italian immigrant parents. He knew as a child that he wanted to be an artist. He attended Cooper Union and received a Master of Fine Arts degree from Yale University. A prestigious Fulbright Scholarship enabled Marcellino to study in Venice, where he was inspired by the grand architecture and Renaissance masters. Returning to America in 1964, he took several years to find his calling. Marcellino recalled, “In the early ’60’s, Abstract Expressionism was on its deathbed—it had become almost ‘academic painting.’ You would look around the classroom and see everybody was doing the same painting. Having been schooled in it—and not realizing I had been schooled in it—it took me a long time to see that that kind of art was not natural to me. I felt like a little girl who took ballet lessons and quit. I felt a little guilty.”

Instead, he took up a number of odd jobs, including building birdhouses and designing furniture. By the 1970’s, Marcellino decided to pursue a career in graphics and illustration: “…eventually I began to think about commercial design, because I have always had strong feelings for calligraphy, lettering, and design. I assembled a portfolio of commercial-looking originals—none of them published—and started bringing it around. Little by little I began to get hired.” An art director in the recording industry saw Marcellino’s portfolio and commissioned an album cover, leading to more assignments in which he brought a fresh perspective to standard layouts.”

In 1975 Marcellino shifted professional gears to work in the publishing industry with equal success. Here again he reacted against the norm, insisting that he be allowed to read a book prior to designing its cover. In so doing, Marcellino brought a more substantive interpretation of the story, buoyed by an equally appropriate typography. Marcellino received critical acclaim for his unique illustrations that captured reader’s imaginations. For over ten years, he was the pre-eminent book jacket designer in America. Some of his most famous covers include Birdy by William Wharton, Bonfire of the Vanities by Tom Wolfe, The Handmaid’s Tale by Margaret Atwood, and The Accidental Tourist by Ann Tyler.

It didn’t take long for Marcellino to gravitate toward illustrating picture books. His maiden effort, Puss in Boots (1990), celebrates its 25th anniversary this year and augured well for the artist since it won a Caldecott Honor. Taking Charles Perrault’s classic story as a point of departure, Marcellino employed colored pencil to create exquisitely detailed and atmospheric scenes of the French court and countryside. From there, Marcellino illustrated and re-interpreted a number of tales, including Hans Christian Andersen’s The Steadfast Tin Soldier(1992), E.B. White’s The Trumpet of the Swan (2000), and the Grimm Brother’s The Devil’s Three Golden Hairs, renamed Ouch! (1998).

Marcellino’s children’s book drawings are rich in texture and narrative detail. A consummate draftsman, he employed colored pencil and watercolor to sensitively portray characters and settings, often creating unique perspectives and historically accurate locales. He displayed a vivid sense of detail and unerring ability to infuse his books with humor, whether gentle or raucous. Marcellino’s final book, I, Crocodile (1999), which he both wrote and illustrated, shows him hitting his stride with words and pictures. Marcellino envisioned a sequel, Arriverderci, Crocodile, but tragically lost his battle with cancer in 2001 before he could finish the book. His sketches for Arriverderci, Crocodile will be featured in the exhibition.

“The Carle is thrilled to bring this important work, beloved by so many, to Amherst,” says H. Nichols B. Clark, the Carle’s curator emeritus and organizer of the exhibition. “Fred was so versatile and thoughtful, and wickedly funny. His love of the Venetian Renaissance artists Giorgione, Bellini, and Titian comes through in the exquisite compositions and glow of his art. His ability to capture just the right expression for his characters provides a broad range of human emotion, from the profound to the laugh-out-loud.”

The 44-page book The Art of Fred Marcellino by Nicholas Falletta is available in The Carle Book Shop.

Inspired by the exhibition A Renaissance Man: The Art of Fred Marcellino, this workshop takes an in-depth look at the fascinating world of book cover and jacket design. Participants will explore a variety of picture books and consider how their covers inform the reading experience. Teachers will discover ideas and projects to help their students learn about the art of book covers. The workshop will include guided time in the galleries. Registration is required.

July 19, 1:00 pm
(1PDP) Join Chief Curator Ellen Keiter for a guided tour of the exhibition A Renaissance Man: The Art of Fred Marcellino.

Since opening in 2002, the 40,000-square foot facility has served more than half a million visitors, including 30,000 schoolchildren. The Carle houses more than 13,000 objects, including 6,600 permanent collection illustrations. The Carle has three art galleries, an art studio, a theater, picture book and scholarly libraries, and offers educational programs for families, scholars, educators, and schoolchildren. Educational offerings include professional training for educators around the country and Master’s degree programs in children’s literature with Simmons College. Museum hours are Tuesday through Friday 10 am to 4 pm, Saturday 10 am to 5 pm, and Sunday 12 noon to 5 pm. Open Mondays in July and August and during MA school vacation weeks. Admission is $9 for adults, $6 for children under 18, and $22.50 for a family of four. For further information and directions, call 413-658-1100 or visit the Museum’s website at www.carlemuseum.org.