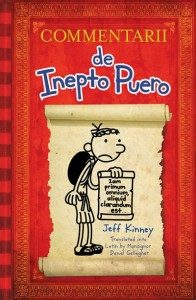 New York, NY — Before a packed crowd of the faithful in St. Peter’s Square in Vatican City, Pope Francis received a copy of the forthcoming Latin edition of the worldwide bestselling Diary of a Wimpy Kid. The first book in the blockbuster series, titled Commentarii de Inepto Puero, was presented to His Holiness at the Vatican by its translator and pastoral staff member Monsignor Daniel B. Gallagher. Father Gallagher, a priest of the Diocese of Gaylord in the United States, is currently assigned to the Office of Latin Letters at the Vatican Secretariat of State. Commentarii de Inepto Puero will be published by ABRAMS under its Amulet imprint and will be on sale in North America in August 2015.

“Seeing the Pope holding a copy of the Latin edition of my first book is beyond an honor,” said bestselling author Jeff Kinney. “It is a joy to have the book translated into Latin, especially by someone as skilled and diligent as the Monsignor.”

Monsignor Daniel B. Gallager formerly taught philosophy and Latin at Sacred Heart Major Seminary in Detroit, Michigan. His study of medieval philosophy led to a passion for Latin, which he now teaches at the Paideia Institute for Humanistic Study.

“Translating the book into Latin was a delight and a challenge, at times,” said Monsignor Gallagher. “The delight was making Greg into Gregori, and the challenge was to not laugh too much during the process.”

Monsignor Gallagher is the editor of the Values in Italian Philosophy and Popular Culture series. His articles have appeared in such journals as Postgraduate Journal of Aesthetics, Josephinum Journal of Theology, Sacred Architeture Journal, Journal for Christian Theological Research, Fellowship of Catholic Scholars Quarterly, Maritain Studies, The Latin Americanist, and Social Justice Review, in addition to various collected volumes. He is the translator of Vittorio Possenti’s Nihilism and Metaphysics, The Third Voyage. Monsignor Gallagher’s latest activities focus on teaching and writing Latin according to his predecessor in the Office of Latin Letters.

Following the release of the Latin translation, the next all-new book in the series is one of the most anticipated books of 2015. Diary of a Wimpy Kid: Old School—originating from ABRAMS’s Amulet imprint—will go on sale for publishing houses in the United States, the United Kingdom, Canada, Germany, Australia, Turkey, Greece, Japan, Brazil, Spain, Romania, Portugal, Hungary, Sweden, Taiwan, Latvia, and Norway. Bestselling author Jeff Kinney will embark on an unprecedented tour around the world, a first for the series. Jeff will be featured in international media and will meet tens of thousands of fans during author events held in major venues. All publicity, marketing, and social-media promotions will be coordinated on a global scale with all publishing partners.

Published in 2007, the first Diary of a Wimpy Kid book was an instant bestseller, and just a year later, more than 100,000 copies were in print in the United States alone. With each subsequent book, in-print numbers continue to grow exponentially both here and abroad. The ninth book, Diary of a Wimpy Kid: The Long Haul, sold over 2 million copies in all formats around the world in its first week. There are more than 150 million copies of the series in print. The book series has won five Nickelodeon Kids’ Choice Awards.

The Diary of a Wimpy Kid series has been a fixture on the USA Today, Wall Street Journal, andPublishers Weekly bestseller lists. The series has remained on the New York Times bestseller lists since the publication of the first book, for more than 400 weeks total, and more than 300 weeks on the series list. The books have been sold in more than 44 territories in 42 languages. Published by Amulet Books, an imprint of ABRAMS, Kinney’s work has been widely praised for its ability to turn reluctant readers on to books. Jeff Kinney was named one of Time magazine’s most influential people in the world. Three movies based on the book series have grossed more than $250 million internationally. Jeff Kinney won two Children’s Choice Book Awards. Books in the series have won numerous awards voted on by students and teachers around the globe. The Wimpy Kid Island (Wimpy Wonderland) on poptropica.com, a virtual world for kids, remains one of the most visited on the site.

Founded by Harry N. Abrams in 1949, ABRAMS is the preeminent publisher of high–quality art and illustrated books. Now a subsidiary of La Martinière Groupe, ABRAMS is the publisher of bestsellers such as the wildly popular Diary of a Wimpy Kid series by Jeff Kinney, the award-winning cookbooks of Alton Brown, and the stunning photography of Yann Arthus-Bertrand’s Earth from Above. ABRAMS publishes books in the areas of art, photography, cooking, interior design, comics, craft, fashion, sports, and pop culture, as well as children’s books and general interest. The company’s imprints include Abrams; Abrams Appleseed; Abrams ComicArts; Abrams Image; Abrams Noterie; Abrams Books for Young Readers; Amulet Books; Stewart, Tabori & Chang; and STC Craft.