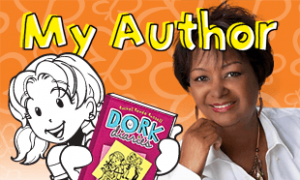 New York, NY — #1 New York Times bestselling Dork Diaries author Rachel Renee Russell will publish a new illustrated book series, it was announced today by Mara Anastas, Vice President, Publisher, Aladdin and Simon Pulse. The new series, called THE MISADVENTURES OF MAX CRUMBLY, will launch in April 2016 followed by a second book in Spring 2017. With 20 million copies currently in print worldwide of the Dork Diaries books, the latest book in the series, Dork Diaries 9: Tales from a Not-So-Dorky Drama Queen, will debut at #1 on the New York Times series bestseller list on June 21, 2015.

THE MISADVENTURES OF MAX CRUMBLY introduces Max Crumbly and his daily ups and downs at South Ridge Middle School. Homeschooled by his grandmother until he begs his family to send him to public middle school, Max begins to rethink that choice when Tommy Silver keeps stuffing him in his locker. For ages 8-12, this hilarious and heartfelt new series is illustrated with Max’s black-and-white comics as he attempts to escape the locker and tries his best to be the hero his school needs.

“It just makes perfect sense for Rachel Renee Russell to continue to write for this age group, this time about a boy hero. Like Nikki Maxwell and her Dork Diaries friends, Max Crumbly is an enormously funny and likeable character sure to endear himself to Rachel’s existing fan base as well as a whole new audience of fans,” said Anastas.

Rachel Renee Russell added, “I’m excited to introduce Dork Diaries fans to a whole new world and the misadventures of a new hero, Max Crumbly, to root for and laugh with, as he navigates the pitfalls of middle school and the secrets that literally hide behind a NOT so ordinary locker!”

The next eagerly anticipated blockbuster in the Dork Diaries series, Dork Diaries 10, will be published on October 20, 2015. The film version of the series is in development at Lionsgate.