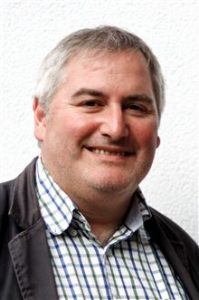 Chris Riddell, creator of the bestselling Goth Girl series, double CILIP Kate Greenaway Medal
winner and political cartoonist, has today (Tuesday 9 June) been appointed the ninth Waterstones
Children’s Laureate at a ceremony at BAFTA in London’s Piccadilly. Riddell, 53, launched his
laureateship by championing creativity in schools and beyond, and asking families to come together
and unleash their imaginations by “drawing every day.” Recognising the legacy of the role he is
inheriting, he said: “I couldn’t be more proud to accept this vital role, on which successive Laureates
have stamped their identities in their own distinctive ways. During my term, I want to use the
immediacy and universality of illustration to bring people together and lead them all into the
wonderful world of books and reading.”

Accepting the Children’s Laureate Medal from outgoing Laureate Malorie Blackman, Riddell
revealed plans to put visual literacy at the heart of his term of office, which runs until 2017. He will
use his Laureate’s Log – an online visual diary of his time in the role – to entertain and inform those
who follow his progress, and encourage families to keep their own visual diaries. He will celebrate
and defend school libraries and librarians who, together with parents, match children with books
that will inspire and help them grow into great readers and thinkers. He intends to emphasise the
excitement of illustration at live events, both alone and with unexpected collaborators from across
the arts. Riddell said: “I’m interested in illustration in all its forms, not only in books for children but
in posters, prints and performance, as a way of drawing people into books and stories. I want to
continue to explore interesting ways to bring words and pictures together over the next two years.”

Calling for more time and space to be allocated to reading in schools, he added: “It’s surely bizarre
that it is not a requirement for the very places where children will learn how to read, draw, think and
create to have a space for books. I want to help and encourage every school to do more for readers:
if they have nowhere to read, create a space with a few books; if they have a bookshelf, have two; if
they have a reading room, aim for a library!”

The role of Children’s Laureate is awarded once every two years to an eminent author or illustrator
of children’s books to celebrate outstanding achievement in their field and to acknowledge their
importance in creating the readers of tomorrow. Riddell, a two-time winner of the prestigious Kate
Greenaway Medal for illustration in children’s books, is the ninth recipient of the honour and very
aware of the prestige and importance of the role. He talked of the enduring influence his
predecessors have had on him, describing them as Children’s Laureate Super Heroes and presenting
original illustrations of ‘The Fantastic 8’ including Quentin Blake as ‘The Big Friendly Genius’,
Jacqueline Wilson as ‘The Silver Signer’ and Blackman herself as ‘Nought and Crosser’ (referencing
her Noughts and Crosses series of novels). Riddell ended his speech by donning a ‘Zorro’-style mask
and revealing himself as the masked champion of artistic ambition, ‘The Doodler.’

He said: “I am humbled to take on this role after the giants that have come before me. I want to put
the joy of creativity, of drawing every day, of having a go and being surprised at what one can
achieve with just a pencil and an idea at the heart of my term as Laureate. I want to make sure
people have fun whilst addressing fundamental issues I care about passionately.”

Riddell was presented with the specially commissioned solid silver Children’s Laureate medal and a
£15,000 bursary cheque by Abigail Campbell, Chair of the Children’s Laureate Steering Group. She
said: “Chris is a creative powerhouse and clearly excited at his new position’s potential: he will be
listened to not just by the young people he meets, but by opinion-formers and policy-makers at the
highest level. He will inspire children and families in the work he does over the next two years. The
panel cannot wait to see children’s books’ new super hero in action.”

Waterstones Managing Director James Daunt said: “The Laureate performs an important role in
bringing issues of literacy to public attention, and each does it in their own inimitable style. We at
Waterstones could not be happier at Chris’s appointment: he is a firm favourite of our booksellers
and of by far our most important customers – the young readers of the United Kingdom. We will be
very proud to support him over the next two years.”

Waterstones is the lead sponsor of the Children’s Laureate post, with other sponsorship and funding
coming from children’s publishers and Arts Council England. Independent literature charity Book
Trust continues to manage the award.

The Twitter hashtag for the Children’s Laureate is #ChildrensLaureate

Chris Riddell is a prolific writer and illustrator whose work is familiar to both children and adults. He is
known especially for his distinctive line drawings with their clever caricature, fascinating detail and often
enchanting fantasy elements. He has won the prestigious Kate Greenaway Medal twice, in 2002 for Pirate
Diary and in 2004 for Jonathan Swift’s Gulliver. His solo work includes the Goth Girl series, the Ottolineseries and
the picture books The Emperor of Absurdia and Alienography. The first Goth Girl novel won the Costa Children’s
Book Award in 2013. He received the Hay Festival Medal for Illustration at the 2015 Hay Festival.

He has worked widely with a variety of collaborators: Paul Stewart on the Muddle Earth, Edge Chronicles and
Wyrmweald series; Neil Gaiman on The Graveyard Book, The Sleeper and the Spindle, and Fortunately the Milk, and
Russell Brand on Trickster Tales: The Pied Piper of Hamelin. He has also illustrated A Great Big Cuddle: Poems for the
Very Young by former Children’s Laureate Michael Rosen, published in September.

In addition to his children’s books, Chris is a renowned political cartoonist whose work appears in The
Observer, The Literary Review and The New Statesman. He lives in Brighton with his wife and has three grown-up
children. More information can be found at www.chrisriddell.co.uk or on Facebook at
www.facebook.com/chris.riddell2. Chris can also be followed on Twitter and Instagram (@chrisriddell50).
He is represented by Philippa Milnes-Smith at Lucas Alexander Whitley Ltd www.lawagency.co.uk.

The selection committee consider nominations for the Children’s Laureate from a range of organisations
representing librarians, publishers, writers, illustrators, literature development workers, including the
International Board on Books for Young People (IBBY) and booksellers. They also consider authors and
illustrators nominated by children who vote online through the Children’s Laureate website.

The Waterstones business is the UK and Eire’s leading high street bookseller with 279 shops. Waterstones is
the only national specialist book retailer of scale in the UK, with the average sized shop merchandising a
range of around 30,000 individual books and with 200,000 titles in the largest shop. Waterstones was acquired
by A&NN Group, an investment subsidiary of the family trust associated with international investor and
businessman, Alexander Mamut, from HMV Group PLC on 29th June 2011. www.waterstones.com

Book Trust is Britain’s largest reading charity. It has a vision of a society where nobody misses out on the lifechanging
benefits that reading can bring. Book Trust is responsible for a number of successful national
reading promotions, sponsored book prizes and creative reading projects aimed at encouraging readers to
discover and enjoy books. www.booktrust.org.uk