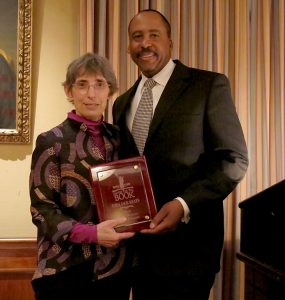 NEW YORK—June 5, 2015—Ezra Jack Keats (1916-1983) is among seven distinguished writers who were inducted this week into the NYS Writers Hall of Fame. The induction took place on June 2nd at the sixth annual ceremony with a gala at the Princeton Club of New York.

The NYS Writers Hall of Fame was established by the Empire State Center for the Book, an affiliate of the Library of Congress Center for the Book, to highlight the rich literary heritage of New York State and to recognize the legacy of individual New York State writers. A Caldecott award-winning children’s book author and illustrator, Keats wrote the beloved classic The Snowy Day, which broke the color barrier in mainstream children’s publishing.

“We are honored that Ezra joins six other talented inductees into the NYS Writers Hall of Fame,” says Deborah Pope, Executive Director of the Ezra Jack Keats Foundation. “With Ezra’s centenary coming in 2016, this is the perfect time to bring attention to his timely body of work, which celebrates the multicultural nature of our world.”

Rocco Staino, Director of the Empire State Center for the Book, says, “We’re delighted to induct Ezra Jack Keats into the Writers Hall of Fame for his picture books for children. His work has stood the test of time and with this recognition it is our hope more people will rediscover Ezra Jack Keats.”

The award was presented by E.B. Lewis, an acclaimed children’s book illustrator and winner of the Coretta Scott King Illustrator Award, among others. Lewis says, “Ezra Jack Keats’s books reflect an exuberant sense of place, and a marvelous embrace of diversity that’s as natural as it was groundbreaking in his day. Through the eyes of a child, he captured the essence of mid-century New York and put dignity on the faces of the heretofore invisible.”

Nominees to the NYS Writers Hall of Fame were chosen by a selection committee comprised of leading professionals in the fields of education, libraries and publishing, including Rocco Staino, who announced the winners on February 5, 2015, at the New York Library Association headquarters in Guilderland, N.Y.

About the Ezra Jack Keats Foundation
Founded by the late Caldecott award-winning children’s book author and illustrator Ezra Jack Keats, the Ezra Jack Keats Foundation fosters children’s love of reading and creative expression by supporting arts and literacy programs in public schools and libraries; cultivating new writers and illustrators of exceptional picture books that reflect the experience of childhood in our diverse culture; and protecting and promoting the work of Keats, whose book The Snowy Day broke the color barrier in mainstream children’s publishing. Keats. Imagination. Diversity.

For more about the Foundation, please visit www.ezra-jack-keats.org.

For a complete list of Hall of Fame inductees, 2010 through 2015, please visit http://www.nyla.org/max/4DCGI/cms/review.html?Action=CMS_Document&DocID=1061&MenuKey=CFTB.