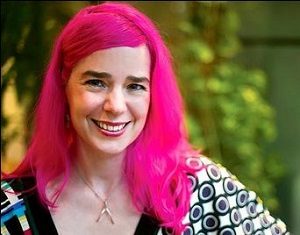 New York, NY – Following the international success of the Daughter of Smoke & Bone Trilogy, Little, Brown Books for Young Readers will publish three new young adult novels by New York Times bestselling fantasy author and National Book Award finalist Laini Taylor, it was announced today by Megan Tingley, the division’s Executive Vice President and Publisher. Acquired by Alvina Ling, Vice President and Editor-in-Chief and Taylor’s longtime editor, the deal for world print (excluding UK), electronic, and audio rights was negotiated with Jane Putch of Eyebait Management. The first book,The Muse of Nightmares, is a high fantasy young adult novel with a gothic flavor, and will launch in Fall 2016. Taylor describes it as follows: “There was a war between men and gods, and men won. The few surviving children of the gods have grown up in hiding, dreading the day they know must come: when humans find them, and end them. That day is at hand.” Eagerly anticipated abroad, The Muse of Nightmares will simultaneously release in the UK from sister company Hodder & Stoughton.

“We are thrilled to publish The Muse of Nightmares, Laini’s first novel following the epic Dreams of Gods & Monsters,” said Megan Tingley. “Laini is a master at weaving exquisite language, complex characters, lush settings, and beautiful pacing into unforgettable stories that leave readers breathless, and we’re sure that Muse will be at the top of everyone’s must-read list for 2016. We’re eager to see Laini’s passionate fan base flock to this new novel in the same way they’ve supported the Daughter of Smoke & Bone Trilogy around the globe.”

“I can’t imagine a happier publishing home than I’ve had for the past five years with the wonderful folks at Little, Brown Books for Young Readers,” said Taylor. “After five years of total commitment to the Daughter of Smoke & Bone Trilogy, it’s both frightening and thrilling to be building a new world and new characters from scratch.”

Of The Muse of Nightmares, Taylor shared, “I’m excited beyond belief to have found the proper form, at last, for this story that’s been in my head for about two decades. I can’t say much about it, but I’ll say this: it’s about otherness, and yearning to belong in a place you never can. I can only hope that readers will respond to these new characters with the same passion as they have to Karou and Brimstone, Prague and Eretz.”

The widely acclaimed Daughter of Smoke & Bone Trilogy, for which Universal Pictures acquired film rights (with Joe Roth set to produce), is currently available in thirty-three languages. Of her experience meeting fans internationally, Taylor said, “The reception of the Daughter of Smoke & Bone Trilogy has been and continues to be a dream come true. I’m blown away by the incredible fan art, cosplay, and tattoos from readers all around the world, who give the books new life and new dimensions every day. Fantasy readers are the best.”

To celebrate and encourage pre-orders for the July 7 paperback release of Dreams of Gods & Monsters, the epic conclusion to the Daughter of Smoke & Bone Trilogy, fans looking to journey back to Eretz are invited to unlock an exclusive, never-before-seen genesis chapter by Laini Taylor (written on the very first day Karou and Brimstone danced into her mind) by tweeting their favorite quotes from the Daughter of Smoke & Bone Trilogy throughout the month of June (using the hashtag #UnlockLainiTaylor). Once 613 hashtags have been reached (the total page count for Dreams of Gods & Monsters), Little, Brown Books for Young Readers will reveal the exclusive chapter via theNOVL.com, the imprint’s YA fan community website. Following the paperback release of Dreams of Gods & Monsters this summer, Little, Brown will publish The Daughter of Smoke & Bone Trilogy Paperback Gift Set on October 20, 2015.

Laini Taylor is the New York Times bestselling author of the Daughter of Smoke & Bone Trilogy: Daughter of Smoke & Bone, Days of Blood & Starlight, and Dreams of Gods & Monsters, and the companion enovella, Night of Cake & Puppets. She is also the author of the Dreamdark books, Blackbringer and Silksinger, and the National Book Award finalist Lips Touch: Three Times. She lives in Portland, Oregon, with her husband, illustrator Jim Di Bartolo, and their daughter, Clementine. Her website is lainitaylor.com.