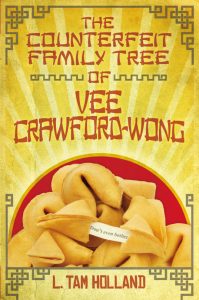 A Post That Has Nothing to Do with Sookie Stackhouse

Throughout my life, I’ve had conversations like the above. It’s human nature to put people into categories, and I was not easily placed. I inherited my Vietnamese mother’s eyes and cheekbones and my white father’s nose and skin tone, giving me what has been called an “exotic” look.

From an early age, I made efforts to define my racial identity (something kids do as early as two years old, for themselves and others, according to a number of studies). As a boy, I identified as white. Other than my mom, who was the only one in her family to move to the United States, all of my relatives were white. The neighborhood I lived in was predominantly white. Plus, everyone on the TV shows I watched and in the books I read were white (or animals). On top of that, when I went to Little Saigon in Chicago with my mom, I felt distinctly “other.” It’s not surprising that I would choose to identify with my white half. Dr. Erin Winkler, an associate professor at the University of Wisconsin, notes, “[C]hildren pick up on the ways in which whiteness is normalized and privileged in U.S. society…picture books, children’s movies, television, and children’s songs…all include subtle messages that whiteness is preferable.”

But my classmates had different ideas. My eyes were slanted enough to earn me the label “Chinese” (it was the 1980s—everyone Asian was Chinese). I excelled at school, particularly in math, and was an accomplished tennis player (a sport that requires focus and discipline), only because, as my peers regularly informed me, I was Asian.

Throughout high school, I continued to try to downplay my Vietnamese heritage—I wanted to be like the cool, popular white kids around me. When I got to college, though, I started to self-identify as Asian (I’ll tell you why over a drink). Mind you, I didn’t join any of the Asian-American groups on campus; I simply started saying “I’m Asian” when asked “What are you?” After moving to Los Angeles, I switched back to white (I’ll tell you why over a drink). My commercial agent thought differently, sending me to castings where I was alternately the whitest, most Asian, or least Hispanic person there.

It’s only within the last decade that I’ve embraced both sides of my heritage. (The opportunity to choose one’s own racial identity is a relatively new one.) It’s important to me that I honor my mom and dad’s influences on me, so I make a point to correct people if they place me in just one category. For a while, I used the word “Eurasian.” Now, I describe myself as biracial and give the specifics if asked.

I’ve chatted with friends who are biracial or multiracial, and we’ve all had very different experiences, depending on our mix, gender, and geography. One thing we have in common is that none of us could single out a book from our childhoods that captured the experience of being multiracial. Where were the books for us? Don’t “exotic” people deserve to have their stories told, too?

Happily, today there are a number of children’s books that are about or star kids who are mixed. (Do a search on Goodreads and you’ll find lists for all reading levels.) I’ve had the pleasure of reading novels that have characters whose upbringings mirror my own, books like The Counterfeit Family Tree of Vee Crawford-Wong by Lindsay Tam Holland, To All the Boys I’ve Loved Before by Jenny Han and Eleanor & Park by Rainbow Rowell. I saw myself in Vee, Lara Jean, and Park’s stories. I would have loved to have read them as a teenager.

With nine million Americans identifying as more than one race, with one in every seven marriages being between spouses of a different race or ethnicity, and with the number of mixed-race babies soaring, the demand for more of these stories is growing.

As an editor, I’m looking to acquire projects that address the biracial experience. As a writer, I hope someday soon to add to the canon of existing titles.

Christian Trimmer is an executive editor for Simon & Schuster Books for Young Readers. He is also the author of the picture book Simon’s New Bed, out 8/25/15. Learn more at christiantrimmer.com.