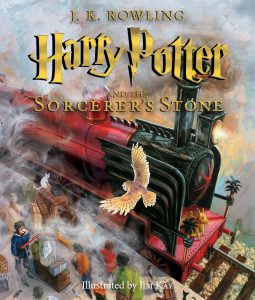 New York, NY – Scholastic (NASDAQ: SCHL), the global children’s publishing, education and media company, today released the exclusive cover image of the fully illustrated edition of J.K. Rowling’s bestselling Harry Potter and the Sorcerer’s Stone. Bloomsbury UK also revealed the image simultaneously. Illustrated by award-winning artist, Jim Kay, the cover is an image of Harry Potter on Platform 9 ¾ surrounded by witches and wizards, trunks and owls, about to board the Hogwarts Express for the first time and is available for download at  http://mediaroom.scholastic.com/harrypotter.

The illustrated hardcover edition of Harry Potter and the Sorcerer’s Stone will be published globally on October 6, 2015, and Scholastic plans to publish fully illustrated editions—one per year—of each of the seven titles. Over 450 million of the Harry Potter books have sold worldwide and the series continues to appear on bestseller lists in the U.S.

About Jim Kay
Jim Kay won the Kate Greenaway Medal in 2012 for his illustrations in A Monster Calls by Patrick Ness. Jim studied illustration at the University of Westminster and since graduating has worked in the Archives of Tate Britain and the Royal Botanic Gardens at Kew. Jim has produced concept work for television and contributed to a group exhibition at the Victoria and Albert Museum in London. He now lives and works in Northamptonshire, England, with his partner and a rescued greyhound.