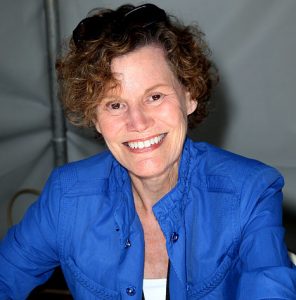 The 21st Annual Children’s Book Art Auction and Reception at this May’s BookExpo America will honor Judy Blume, the pioneering author who helped inspire a new candor in children’s books by daring to write about sex and other “adult” topics that trouble kids.  Blume will also be recognized for her fight for the free speech rights of young adult readers.

“It took great courage to open children’s literature to the discussion of the problems that face kids in the modern world, and Judy Blume continues to inspire us to fight the efforts to censor what kids want to read,” said Chris Finan, director of the American Booksellers for Free Expression (ABFE).

Proceeds from the auction will support ABFE’s defense of the free speech rights of kids, including the Kids’ Right to Read Project and Banned Books Week.

The Art Auction and Reception will be held on Tuesday, May 26, from 5:30 p.m. to 7:30 p.m. at the Grand Hyatt New York, this year’s Hotel ABA, located at 42nd Street and Grand Central Station.

ABFE has sent a letter asking artists to support the auction by contributing anything from a sketch to a finished piece. There will be a special section for pieces that honor Blume and her books. An auction FAQ and donation form are available online. The deadline for submitting art is May 1. However, pieces honoring Blume can be submitted until May 15.

There are several ticket levels. General admission is $105. Tickets for ABA membersare $10. Bookseller members of the ABC Children’s Group are free, but registration is required. Donating artists are also free and may register by e-mailing auction manager Inessa Spencer.

Random House Children’s Books, which has been a steadfast supporter of ABFE, the ABC Children’s Group, and other organizations that promote free speech and the fight against censorship, is home to beloved and bestselling children’s authors, illustrators, and brands, including Dr. Seuss, Golden Books, Magic Tree House, Richard Scarry, Markus Zusak’s The Book Thief, R.J. Palacio’s Wonder, Louis Sachar’s Holes, and many others.