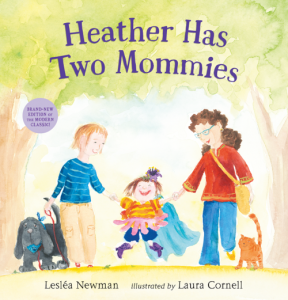 “So you’re the little woman who wrote the book that started this great war,” said Abraham Lincoln when he met Harriet Beecher Stowe, author of Uncle Tom’s Cabin. Those words came back to me in the early 1990’s when I watched a newscast showing Mary Cummins, President of School Board District 24 of Queens NY saying, “This is a war and it will be fought….” Cummins was talking about the Rainbow Curriculum, a resource compiled for New York City school teachers that suggested titles to make classrooms more inclusive and diverse. Cummins objected to three books included in the curriculum that feature families with same-sex parents including my own book, Heather Has Two Mommies. Chaos ensued with protests, demonstrations, and heated school meetings that came close to violence. Headlines such as “How a ‘Rainbow Curriculum’ Turned into Fighting Words” (from the New York Times) and “City writer’s book involved in national gay-rights battle” (from the Daily Hampshire Gazette, my hometown newspaper), gave me pause. Fighting words? Battle? Had I also written a book that started a great war?

That certainly was not my intention.

I wrote Heather Has Two Mommies in 1988 at the request of a lesbian mother who stopped me on the street one day and said, “We have no books to read to our daughter that show a family like ours. Somebody should write one.” I knew exactly how this little girl felt. Growing up in the 1950’s, I had no books that showed a family like mine: a Jewish family celebrating Chanukah and Passover and eating matzo ball soup and challah on Friday nights. After reading book after book about families that decorated Christmas trees and hunted for Easter eggs, I wondered why my family didn’t do those things. Why was my family so different? What was wrong with my family?

No child should feel like there is something “wrong” with her family because her family isn’t part of the dominant culture. Children need books in which they can see themselves in order to feel validated and that they belong.

Heather and her mommies are a pretty typical family. They bake cookies. They go to the park. As the book goes on, Heather attends her first day of school. When the teacher reads a story about a boy whose father is a veterinarian, some of the other children talk about their daddies. Heather wonders if she is the only one who doesn’t have a dad. Heather’s teacher has all the children draw pictures of their families. The drawings make it clear to Heather, her peers, and children reading the book, that families come in all configurations.

Heather’s journey to publication was not easy. After the book was declined by fifty publishers, I was running out of options. One day, I told a friend, Tzivia Gover, a lesbian mom with a desk top publishing business, about my frustration. We decided to publish the book ourselves. We sent out letters asking for $10 donations and raised $4,000. I kicked in some money of my own, we found an illustrator and a printer, and about a year later, 4,000 copies of Heather Has Two Mommies were delivered to my door. About six months after that, Alyson Publications bought the rights to the book and took over. And that’s when all the controversy began.

Many things have happened in the 25 years since Heather Has Two Mommies hit the bookstore and library shelves. The book was listed by the Office of Intellectual Freedom of the American Library Association as the 9th most frequently challenged book to the 1990’s. It has been stolen from library shelves. It has been defecated upon. It has been read into the Congressional Record. But more importantly, it has touched the lives of children.

“Thank you for writing Heather Has Two Mommies. I know that you wrote it just for me,” reads a letter I received from an African American girl named Tasha who saw across racial lines to relate to a white, blonde girl who had two moms just like she did. A lesbian mom told me that her son, Nick, crossed out the word “Heather” every time it appears in the book and wrote his name instead. Nick saw across gender lines and literally inserted himself into the book. Another child with two moms was very nonplussed about the whole thing. After hearing the book, he simply asked his parents, “Can we have a dog and a cat like Heather?”

It is clear to me that children do not come into the world with a preconceived notion of who belongs in a family. As Ms. Molly, Heather’s teacher, says in the book, “The most important thing about a family is that all the people in it love each other.” Children know this. They know it in their hearts and souls. They know it in their bones.

Twenty-five years after publication, a new generation of children with same-sex parents and their friends will have the opportunity to read Heather Has Two Mommies. The book, which has just been released by Candlewick Press, features a shortened text and new illustrations by Laura Cornell which show a family of the 21st century. Heather’s moms are women on the go. And they clearly love their daughter. For example, it is obvious that Heather chose her first-day-of-school clothes all by herself. What parent would dress their child in a yellow-and-orange striped t-shirt, pink twirly skirt, blue shorts, and purple cowgirl boots?  By allowing Heather to dress the way she wants, her moms show that they accept her just as she is. And when they drop her off at school, Heather waves to them and joins the other children (a racially diverse group) with a confident smile on her face.

Lesléa Newman is the author of 65 books for readers of all ages, many of which feature families with same-sex parents including Donovan’s Big Day; Mommy, Mama, and Me; Daddy, Papa, and Me; Felicia’s Favorite Story; and Heather Has Two Mommies. She is also the author of the teen novel-in-verse, October Mourning: A Song For Matthew Shepard which received an American Library Association Stonewall Honor.