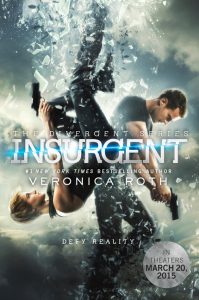 The Twitter Commerce buying experience is completely seamless and allows users to purchase items with one click, direct from HarperCollins, without leaving the social media site. Both HarperCollins and Twitter will promote the book offer with a series of tweets, as well as a Promoted Tweet campaign focused on reaching people who are talking about “The Divergent Series: Insurgent” film.

“We are excited to be collaborating with Twitter on this unique campaign to introduce the Divergent series to a new consumer base,” said Diane Naughton, vice president, integrated marketing for HarperCollins. “This promotion will allow both the Divergent fandom and the Twitter audience to easily and seamlessly purchase the Insurgent book on Twitter.”

“At HarperCollins, we’re committed to staying ahead of the curve on behalf of our authors,” said Angela Tribelli, chief marketing officer for HarperCollins. “By identifying and testing the newest marketing capabilities, we continuously develop innovative ways to reach readers. Thanks to our direct e-commerce platform, we can easily and nimbly pilot Twitter’s exciting new buy functionality with a strong brand like the Divergent series, and we look forward to exploring opportunities for additional authors.”

“We strive to make our authors’ work available to consumers in as many ways as possible,” said Chantal Restivo-Alessi, chief digital officer for HarperCollins. “Promotions such as this not only benefit our authors, but also our existing retail partners, who are able to take advantage of a sales halo effect that we have observed with other similar e-commerce initiatives.”

HarperCollins Publishers is the second largest consumer book publisher in the world, with operations in 18 countries. With nearly two hundred years of history and more than 65 unique imprints around the world, HarperCollins publishes approximately 10,000 new books every year, in over 30 languages, and has a print and digital catalog of more than 200,000 titles. Writing across dozens of genres, HarperCollins authors include winners of the Nobel Prize, the Pulitzer Prize, the National Book Award, the Newbery and Caldecott Medals and the Man Booker Prize. HarperCollins, headquartered in New York, is a subsidiary of News Corp (NASDAQ: NWS, NWSA; ASX: NWS, NWSLV) and can be visited online at corporate.HC.com.