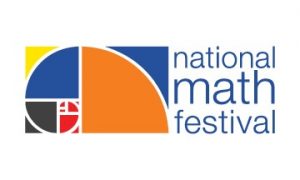 National Math Festival Announces Expanded Schedule of More
Than 40 Free Events From Antarctic Adventure, Minecraft to the Ring of Fire

WASHINGTON, D.C. March 12, 2015 — The Mathematical Sciences Research Institute (MSRI) and the Institute for Advanced Study (IAS) announced today many new featured presenters and an expanded schedule for the National Math Festival, to occur on April 18 from 10 a.m. to 4 p.m. in several Smithsonian museums in Washington, D.C.

The free public celebration, organized in cooperation with the Smithsonian Institution, will feature more than 40 unique performances, interactive exhibits, lectures, and activities for all ages designed to inspire appreciation for the importance, beauty, and fun of math. Events will take place at the Smithsonian’s Enid A. Haupt Garden, the S. Dillon Ripley Center, the National Museum of Natural History, the National Air and Space Museum, the National Museum of African Art, and the Freer and Sackler Galleries, among others.

Among the authors, artists, mathematicians, and researchers presenting at this year’s Festival are:

Leading up to the Festival, math fans across the country are invited to participate in the #ISpyMath online challenge. Launching on this year’s Pi Day (March 14, the day corresponding with the ratio of the circumference of a circle to its diameter — which is approximately 3.14159) through March 28, participants will be challenged to share photos and videos of “math in action” on Twitter, Facebook, and Instagram using the hashtag #ISpyMath. More about #ISpyMath, including challenge guidelines, is available here.

The Mathematical Sciences Research Institute (MSRI) is one of the world’s preeminent centers for collaborative research in mathematics. Since 1982, MSRI’s topic-focused programs have brought together emerging and leading minds in mathematics, in an environment that promotes creativity and the interchange of ideas. Over 1,500 mathematical scientists spend time at MSRI’s California headquarters each year. MSRI is known around the world for the quality and reach of its programs and its leadership in basic research, and also in mathematics education and in the public understanding of mathematics. www.msri.org

About the Institute for Advanced Study (IAS)

The Institute for Advanced Study, founded in 1930 as an independent institution in Princeton, New Jersey, is one of the world’s leading centers for basic research in the sciences and humanities, where the permanent faculty and visiting scholars have the freedom to pursue some of the dee
pest theoretical questions without pressure for immediate outcomes. Its reach has been multiplied many times over through the more than 7,000 scholars who have influenced entire fields of study as well as the work and minds of colleagues and students. www.ias.edu

About the Smithsonian Institution (SI)

Since its founding in 1846, the Smithsonian Institution has been committed to inspiring generations through knowledge and discovery. The Smithsonian is the world’s largest museum and research complex, consisting of 19 museums and galleries, the National Zoological Park, and nine research facilities. There are 6,400 Smithsonian employees and 5,500 volunteers. There were 28 million visits to the Smithsonian in 2014. The total number of objects, works of art, and specimens at the Smithsonian is estimated at nearly 138 million, including more than 126 million specimens and artifacts at the National Museum of Natural History. www.smithsonian.org