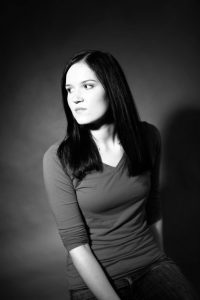 In the untitled first novel of a highly anticipated duology in the vein of Star Wars, Veronica Roth explores—with poise and poignancy—the story of a boy who forms an unlikely alliance with an enemy. Both desperate to escape their oppressive lives, they help each other attain what they most desire: for one, redemption, and the other, revenge. Roth commented, “I’m really enjoying working on this new series. I can’t wait to share it with readers!”

“I am tremendously excited for Veronica Roth’s next project with HarperCollins,” said Susan Katz, President of HarperCollins Children’s Books. “We are incredibly proud to publish the work of such a bright, young writer and are eager to embark on this next adventure in her extraordinary career.”

Katherine Tegen adds, “Veronica is one of the most talented authors I have ever worked with. Her brilliant prose captures the voice of a generation while appealing to readers of all ages. I am thrilled to be working with Veronica on this new series.”

The first of Veronica Roth’s upcoming young adult novels will publish in 2017, with the next novel to follow in 2018.

ABOUT VERONICA ROTH:
Veronica Roth is the #1 New York Times bestselling author of the DIVERGENT series, with over 32 million copies sold. Now a full-time writer, Ms. Roth and her husband call the Chicago area home. You can visit her online at veronicarothbooks.com and on Twitter @VeronicaRoth.

ABOUT HARPERCOLLINS:
HarperCollins Publishers is the second largest consumer book publisher in the world, with operations in 18 countries. With nearly two hundred years of history and more than 65 unique imprints around the world, HarperCollins publishes approximately 10,000 new books every year, in over 30 languages, and has a print and digital catalog of more than 200,000 titles. Writing across dozens of genres, HarperCollins authors include winners of the Nobel Prize, the Pulitzer Prize, the National Book Award, the Newbery and Caldecott Medals and the Man Booker Prize. HarperCollins, headquartered in New York, is a subsidiary of News Corp (NASDAQ: NWS, NWSA; ASX: NWS, NWSLV) and can be visited online at corporate.HC.com.