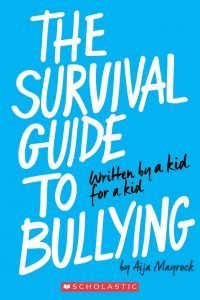 NEW YORK, NY — Scholastic, the global children’s publishing, education and media company, has acquired North American rights to 19-year-old Aija Mayrock’s self-published ebook, The Survival Guide to Bullying. The revised Scholastic edition will be published simultaneously in paperback and ebook formats in July 2015, with a hardcover library edition to follow in September 2015. The deal was negotiated by Debra Dorfman, VP and Publisher, Scholastic, and Jay Kramer for Aija Mayrock.

Written by a teenager who was bullied throughout middle school and high school, The Survival Guide to Bullying offers a fresh and relatable perspective on bullying. Along the way, author Aija Mayrock offers guidance as well as different strategies that helped her survive even the toughest of days. The Survival Guide to Bullying covers everything from cyber bullying to how to deal with fear and how to attain the self-confidence to achieve the life the reader dreams of having—from inspiring “roems” (rap poems), survival tips, personal stories, and quick quizzes. The updated Scholastic edition also features new, never-before-seen content, including an epilogue and an exclusive Q&A with the author.

Aija Mayrock is not a newcomer to Scholastic, as she was a 2013 Silver Medal winner of the Scholastic Art & Writing Award program in the Poetry category. She joins the ranks of celebrated creative leaders such as Andy Warhol, Truman Capote, Richard Avedon, Sylvia Plath, Robert Redford, Stephen King, Myla Goldberg, Richard Linklater, Kay WalkingStick, Zac Posen and Lena Dunham, all of whom won an Award when they were teens.

“We were all immediately blown away by Aija’s book and the strength of her voice,” said Debra Dorfman. “What a feat for such a young woman to take a painful personal experience and turn it into a beacon of hope! We knew immediately that with our extensive connections to kids, parents, and teachers, Scholastic would be the best home and platform for her to reach people affected by bullying.”

“When Scholastic told me they wanted to publish my book, it was a dream come true,” said Aija Mayrock. “It was only a year and a half ago that I won the Scholastic Art and Writing Awards for my poetry. That was the moment that changed my life and gave me the confidence to write the first page of this book. I am so honored to be part of the Scholastic family.”

About Aija Mayrock
Aija Mayrock is nineteen years old and in her freshman year of college in New York City. She began writing this book at age sixteen and promised herself that she would publish it as her gift to the next generation of kids who will be bullied. Aija dealt with bullying for many years, beginning in the third grade. In the midst of these very difficult times, Aija discovered her creativity and passion. She wrote her very first screenplay on the eve of the deadline for the Santa Barbara International Film Festival 10-10-10 competition. She won the competition and from that time forth, pursued her passions. Since then, Aija has continued to work with the Santa Barbara International Film Festival. She has also won awards from the Scholastic Art & Writing Awards for her writing and poetry. Aija is a writer, actress, and filmmaker. Her dream is to give a voice to the voiceless through art.

About The Survival Guide to Bullying (Revised Edition)
Written by a teenager who was bullied throughout middle school and high school, this kid-friendly book offers a fresh and relatable perspective on bullying. Along the way, the author offers guidance as well as different strategies that helped her survive even the toughest of days.

About Scholastic
Scholastic Corporation (NASDAQ: SCHL) is the world’s largest publisher and distributor of children’s books and a leader in educational technology and related services and children’s media. Scholastic creates quality books and ebooks, print and technology-based learning materials and programs, magazines, multi-media and other products that help children learn both at school and at home. The Company distributes its products and services worldwide through a variety of channels, including school-based book clubs and book fairs, retail stores, schools, libraries, on-air and online at www.scholastic.com.