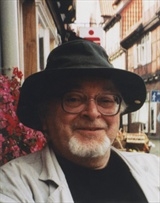 Hoban briefly attended Temple University before enlisting in the Army during World War II. In 1944, he married his first wife, Lillian Aberman, a fellow illustrator whom he’d met at a drawing club and studied with at the Philadelphia Museum School. Together they raised a family in Connecticut and collaborated on several children’s books, including the Frances the Badger series. Throughout his career, Hoban wrote for teens and adults in multiple genres, though he is best remembered for his work for young readers.