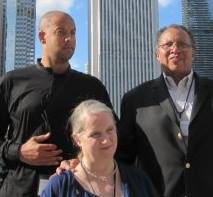 Whenever I think of Walter, I remember walking together. From the moment we met, we walked endlessly, tiptoeing like cartoon characters over the hot bricks of Centennial Park in Atlanta, strolling down the River Walk in San Antonio, giddy after a speech’s end, striding up steep hills in San Francisco, with Walter practically lifting me up, because my feet could not stay in the slip-on shoes I had insisted on wearing. We walked all over Chicago, listening to blues music, delighting in crowds celebrating not one, not two, but the three-peat of Bulls victories, though Walter’s heart would always remain with the Knicks of Earl “the Pearl” Monroe and “Clyde” Frazier.

We walked the long avenues of Washington, DC, sometimes in 100-degree weather, sometimes in light snow. Once we arrived after an actual blizzard hit and somehow managed to make it to Anacostia for an Open Book event. That event was made unforgettable by some struggling young dads who got there against the odds, even if it meant carrying their children through more than a foot of snow on uncleared streets and sidewalks. Walter Dean Myers was coming. They weren’t going to miss him.

Walter and I became colleagues, editor + writer, and friends during our walks. He was curious about everything, and so we spoke about anything: the best point guards, school reform, the latest Conor McPherson play, Delta versus Piedmont blues, Matisse’s book Jazz, slavery in New York State, new finds for Walter’s ephemera collection, which of us loved W.B. Yeats more, the boxers, Walt Whitman’s poems, ships of the line and how scary it must have been to be a powder monkey on them. Our walks, our talks, led us to the beginnings of many different projects, books that ranged throughout the age levels and different genres of children’s publishing. Basketball madness—demonstrated by our stopping at the Cage (the courts on Sixth Avenue and West Fourth Street) to pay homage and critique the players—led to the signing up of Slam. Our joint interest in boxing and love of history, our admiration for people who make a difference, led to his doing a biography of Muhammad Ali, which ended with our both learning the damning truth of boxing’s costs. That same passion for history infused his work on Malcom X: By Any Means Necessary, his biography for older children. Walter felt the importance of presenting as thorough and as rich a history to kids as he could; he felt it as our duty and obligation. No more lies; no more half-truths.

Bits of different conversations, ideas, and interests would meet and challenge one another until a book was born. Early one morning, Walter and I met in the Village. As we passed by the stoop of my building, where I often sat, we discussed how images are presented, how they are framed to make a point—that a person sitting on a stoop in Harlem would be presented differently from my sitting on my stoop in the West Village. He eventually decreed that the picture set in Harlem would end up in sepia, the paper distressed. This point, coupled with our joint admiration of the Matisse cut-outs, led to his writing a picture book that would celebrate Harlem during a difficult time in its history. Vivid, colorful images, brimming with joy and pride, would honor not only the neighborhood, but also the people who had made it what it was, and the people who lived there still.  To Walter, providing an alternative narrative to the “standard” one—a strong, exhilarating riposte to the usual jeremiads of decline and danger, one that did not ignore problems, but that recognized a larger context—would prove a firm step on his mission toward change. That the final book paid more of an homage to Romare Bearden’s work than Matisse’s, as well as showcasing his son’s first picture book art, only made the journey to it more thrilling, because the evolution of a project, of a neighborhood, of a nation, can inspire awe. Yet our discussions were not only about the next project. Those decades we spent walking through convention centers, theaters, and school auditoriums gave me an education in seeing, in putting myself in other people’s shoes. Witnessing the way Walter always introduced himself to serving staff at parties, experiencing the genuine interest he showed in every person he met, with curiosity and deep respect, even—or perhaps, especially—prisoners, challenge me to do better, both as an editor and as a citizen.

Yet it was during those walks through convention centers that he began to get discouraged. At a BEA, he said, come on with me and pointed out that the shift to more graphic, iconic images had essentially erased the progress made toward presenting covers that reflected more of our country’s people. A month later, we did the same thing at ALA, and continued to do so at every conference we attended together until his death.

Now that Walter has left us, I will no longer be able to walk all over this country chatting with him about everything, anything, and nothing at all.

I’m going to call upon all of you to join me by quoting a poet Walter and I both loved:

“We must march, my darlings.”
—Walt Whitman

I won’t be walking, I’ll be marching.

Regina Griffin is an Executive Editor at Egmont USA. She was previously the Editor-in-Chief of Holiday House, and before that an editor at Scholastic Inc., where she first had the honor of publishing Walter Dean Myers.