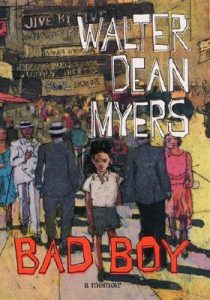 The It’s Possible series, with new installments every day this week, begins this afternoon with a guest post from Walter Dean Myers’ agent Miriam Altshuler.

Walter Dean Myers and I began working together over twenty-five years ago. At the time, diversity in publishing was not discussed nearly as much as it is today. Even back then, Walter understood the need for all children to have their stories told in books that mirrored their diverse lives. Walter’s own story of growing up is well known and comes to life particularly in his memoir, Bad Boy. He and I spoke often about his desire for young readers to have books in which they could see and understand themselves. He knew early on how important this was for every child, and he wrote about the children he understood so well: African Americans who grew up in urban areas, and children who needed to read and learn from books just like he did while growing up in Harlem. He also wrote for all reluctant readers and children who did not have parents or other people in their lives to read to them. He wanted everyone to have books to read (no matter their color or background), but most of all, he wrote for young African American boys. I remember going to ALA for the first time with Walter after his wonderful novel, Monster, won the inaugural Michael Printz Award. A teacher from Detroit came up to him and told us a story about her classroom. She taught ninth grade English and all her students were African American. She could barely get them to show up for class. After reading Monster herself, she decided to read a chapter to the few students who did come. They were riveted. The next day a few more kids showed up, and she read more of the novel. And the day after that more kids came, until the day all the kids were present in the class and she read Monster from start to finish.  Her students were hooked and they began coming to class on a regular basis.  She told this story with tears in her eyes (and I can never tell it without tears in mine). She told Walter his book reached these inner city African American children in a way that nothing else had. Monster helped them to see themselves, their lives, and the choices they made.

Walter, of course, had always understood the power of words and stories. I learned more from that one day than I have in much of my career. Walter knew how to reach children through all kinds of books: contemporary novels, historical novels, poetry, and nonfiction. We spent a lot of time talking about all of his book ideas and how to make them the best they could be. Walter’s ideas were endless, but above all they had to resonate. He knew what made a great story. And I knew when he knew he had a great story because he would keep coming back to it until the right idea took shape. He could love a character or love a subject, but until he saw the arc, heard their voices, and could see how the characters came to life, he knew he was not ready to write it. I was often a sounding board for Walter: He would talk, I would listen, and then I would ask questions about a character or how he saw the shape of the story, and Walter would listen to my questions. But until he had it fully planned out—both in his head and on the story board he would create for each book (as he describes so well in his wonderful writing guide, Just Write!)—he knew it was just an idea. Walter had to feel an emotional connection to each character and story.

Walter always wanted to try new things. One of the great joys of working with him was his incredible ability to listen and learn.  He always wanted to hear what others had to say about a subject, an idea, or what he had written, and he was captivated by so many things. “That is so interesting,” he would always say. I can still hear that excitement in his voice.

Ultimately, he was true to his belief in a new book in the same way he was true to his readers—when something stuck with him, when he remained interested in it and he kept going back to it, he knew it was a book he wanted to write. I believe, and I know Walter did too, that when a book touched him, it would touch everyone who read it, especially the children who needed it the most—the reluctant African American readers who so badly wanted and needed to hear their own story told by someone who understood them.

Miriam Altshuler began her own agency in 1994 after starting her career and working for many years at Russell & Volkening Literary Agency. She represents both children’s and adult books in fiction and non-fiction.