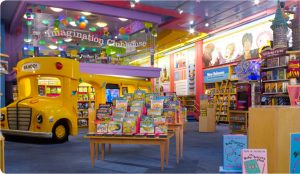 NEW YORK, NY – Scholastic today announced that it will be adding 7,500 square feet of valuable retail space at 557 Broadway in SoHo. The project, which will begin in the spring, will move the Scholastic corporate entrance to Mercer Street and requires closing The Scholastic Store, effective January 2015.

Scholastic purchased 555 Broadway in February 2014, taking ownership of space it had previously rented. This is the first major renovation of the combined 557 and 555 Broadway buildings since 2001 when the new 557 building, designed by Italian architect Aldo Rossi, was completed. That iconic SoHo structure received numerous positive reviews, including a story in the New York Times, in which the chairwoman of the Landmarks and Preservation Commission was quoted saying, “…the Scholastic building offered a ‘textbook example’ of how to build in an historic district.” In addition, Scholastic was honored in 2005 with the Pinnacle Award for Outstanding Corporate Facility by the Building Owners and Managers’ Association (BOMA) of Greater New York and in 2008 with the Lucy G. Moses Preservation Award from The New York Landmarks Conservancy for preserving the cast iron facade of 555 Broadway. The exteriors of the two buildings will remain unchanged other than minor revisions to the ground floor of 557 Broadway to accommodate the new retail space.

“With retail space in SoHo in high demand, we are excited to have this opportunity to rethink the use of the Broadway-facing space at 557 Broadway,” said Kyle Good, Senior Vice President, Corporate Communications at Scholastic. “We’re also looking forward to welcoming employees and visitors into our corporate headquarters through a beautiful, new lobby entrance on Mercer Street.”