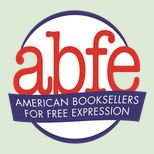 NEW YORK, NY — The American Booksellers Foundation for Free Expression (ABFFE) and the American Booksellers Association (ABA) announced today that ABFFE’s operations will be integrated into ABA’s in order to expand the free speech programming that is available to independent booksellers. As was the case when the Association of Booksellers for Children (ABC) voted to become part of ABA in 2010 as the ABC Children’s Group, ABFFE will become a distinct group within ABA, the American Booksellers for Free Expression Group at ABA (ABFE), beginning January 1. The ABFFE board will be reconstituted as the ABFE Advisory Council. ABFFE President Chris Finan will become the ABFE Group director.

After several months of deliberation, the ABFFE and ABA boards approved the change at their October meetings because they believe it will produce administrative efficiencies, making it possible to expand efforts to educate booksellers and their customers about important First Amendment issues. “As was the case with ABC and ABA, the integration of ABFFE and ABA will make it possible to devote more resources to programming by consolidating administrative functions and reducing the need for fundraising,” ABA CEO Oren Teicher said. The ABFFE staff will remain in place, and ABA’s support for its free speech allies, including the Kids’ Right to Read Project, Media Coalition, and the National Coalition Against Censorship, will remain unchanged, he added.

Regarding the changes, Finan said, “I believe we will be able to work even more closely with independent booksellers to defend free speech.”

As a first step toward integrating ABFFE and ABA, all ABA members will berecognized as official supporters of the ABFE Group. They will receive a sticker expressing support for free speech that can be displayed in a store’s front window as well as a subscription to a new monthly newsletter, Free Speech Report.

Supporters will not be asked to pay dues in the first year. However, those who do choose to contribute financially to help ABFE’s work will be eligible for premiums, including “fREADom” T-shirts, tickets to the Children’s Art Auction at BookExpo America, and autographed copies of Finan’s From the Palmer Raids to the Patriot Act: A History of the Fight for Free Speech in America.

The ABFFE staff will continue to work out of their office in New York City through the end of the year. The ABFE Group at ABA will be located in the association’s office in White Plains, New York, after January 1.

The American Booksellers Foundation for Free Expression was organized by the ABA in 1990 to respond to growing threats to the First Amendment rights of booksellers and their customers. As the bookseller’s voice in the fight against censorship, ABFFE opposed efforts to suppress Salman Rushdie’s Satanic Verses and successfully urged President Bill Clinton to meet with Rushdie at a time when he was still the target of a fatwa. ABFFE joined in legal challenges to two federal censorship laws and numerous state laws that threatened the emergence of the Internet.

ABFFE has been a leader in defending reader privacy since 1998 when it joined Kramerbooks in Washington, D.C., in fighting a subpoena for the book purchase records of Monica Lewinsky, and it continues to seek the restoration of protections for reader privacy that were eliminated by the USA Patriot Act. ABFFE also plays a prominent role in fighting book censorship. With the National Coalition Against Censorship, it co-sponsors the Kids’ Right to Read Project, which supports students, parents, teachers, booksellers and librarians in opposing books challenges around the country.