‘The True Story of the Three Little Pigs’ Turns 25! 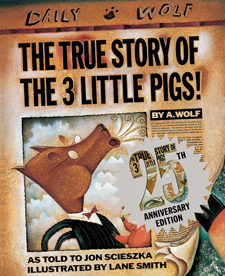 Scieszka says that he and Smith connected instantly: “We were a perfect match, in terms of our sensibilities and humor.” The next challenge was getting an editor on board with their vision. Their persistence paid off when Regina Hayes, then publisher of Viking Children’s Books, fell in love with the book and agreed to publish it. Scieszka and Smith attribute the book’s eventual success to the buzz generated by enthusiastic teachers, librarians, and booksellers.

The two have since teamed up on other titles, including The Time Warp Trio series (1991–1999) and The Stinky Cheese Man and Other Fairly Stupid Tales (1992). They’ve also had their share of individual success. In 2008, Scieszka was named the first National Ambassador for Young People’s Literature. During his two-year ambassadorship, Scieszka connected with children across the country to get them excited about reading.

Now 25 years since their joint debut, Scieszka and Smith are even more proud of the book’s impact:

We hear from new illustrators or authors about how this book impressed upon them they could do something different. If you were eight or nine back then, I think this book made an impression on you. This is one of the first books that subverted a kids’ tale for kids. It struck a chord, I guess. I’m happy that it’s part of so many people’s memories. (Publishers Weekly)