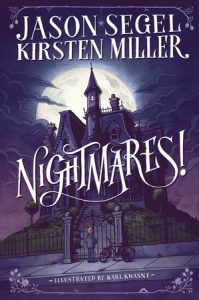 Segel devoted most of his professional life to an acting career in Hollywood so he did not have any experience with writing children’s books. Miller, the New York Times bestselling author of the Kiki Strike middle grade series, has been an established novelist for several years.

“I had a completed screenplay, in essence. I had a plot and the tone and quite a bit of dialogue. It started by me giving that to Kirsten and talking about it to make sure we were on the same page in terms of tone. And that she liked it! The original screenplay was planned as part one of a trilogy. The second two chapters were unwritten, so we talked through my ideas. She and I created a vision together of how the trilogy would unfold. From there it was a kind of handing back and forth. She would write a chapter and hand it over to me. Then I would take the chapter and do my work on it. We would proceed back and forth, which I was used to in writing screenplays. Someone will take act one; someone will take act two.” (The Boston Globe)