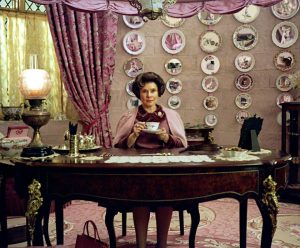 London, England – In a special Halloween treat for Harry Potter fans, J.K. Rowling’s website pottermore.com will post new original writing on October 31 about the witch and former Hogwarts professor Dolores Umbridge. The character was first introduced to readers in Harry Potter and the Order of the Phoenix as the Senior Undersecretary to the Minister for Magic. Umbridge is not only one of the most malicious “Potter” characters, she is the only person other than Lord Voldemort to leave a permanent physical scar on Harry. The new exclusive J.K. Rowling content provides a rich, 1,700-word back story about Umbridge’s life filled with many new details, as well as Rowling’s revealing first-person thoughts and reflections about the character.