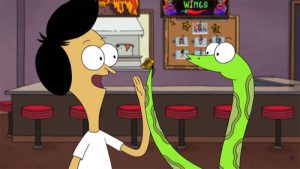 Last week, I came across an interesting article via one of my personal favorite pop culture websites Pajiba.com (their Walking Dead and Game of Thrones coverage makes this self-affirmed geek very happy – what can I say?) – an article that initially enraged me.  And then stuck with me and made me think.

The article in question called out a recent, somewhat controversial interview with author Matthew Klickstein, creator of a new book called SLIMED! An Oral History on Nickelodeon’s Golden Age, on the site Flavorwire.  In the interview, Klickstein discussed the network’s “diversity problem” and, in specific examples, pointed to current Nickelodeon shows (such as the popular Sanjay and Craig) where he criticized instances of showcasing diversity for the sake of diversity, casting lead roles in animated shows where there was no reason for said characters to be ethnically diverse.

There are plenty of hot-button points Klickstein makes in his interview specifically on topics in the ongoing diversity dialogue that I won’t get into here, but what stuck with me long after reading was a point Klickstein made that resonated with me in a way I don’t think was his intention.  According to Klickstein, the strength of a good character within any medium comes down in the simplest form to the writing and development, and in that way, maybe it shouldn’t matter whether said character is Caucasian, Hispanic, African-American, or any other ethnicity, if said ethnicity doesn’t impact the show’s storyline.

My argument in response to that basic reasoning is that Klickstein is demonstrating exactly why it’s so vital to introduce greater diversity into mainstream culture, from television to the publishing industry.  Every literary character in his or her most basic composition has quirks, flaws, personality traits, and essential elements that make him or her unique and worthy of exploration by a writer, regardless of the medium.  Some of those elements are clearly influenced by a person’s ethnic background, or the life they’ve lead within their individual skin, whether for better or for worse.  But there remain basic elements, essential elements, to just being a human being that connect all of us on a basic level that transcend those lines, elements that are vital to character development in any really great piece of writing.

Klickstein’s point is that at the end of the day, the character is what matters, but my argument in return is that, if at the most basic level, essential human elements are shared between all of us, why not embrace every opportunity to color all of literature and television with characters who embody those human traits, even if specific cultural factors aren’t incorporated into the storyline? Does Sanjay need to be an Indian character to be an entertaining one on Sanjay and Craig?  No.  Did Carter Kane in Rick Riordan’s The Kane Chronicles need to come from a mixed-race background?  No.  For the elements of the story that keep the essential plotlines moving in those particular instances, ethnicity only appears in broad strokes to come into play in physical depiction.

And that’s the point.  Kids growing up, watching TV and reading, need to see themselves and their respective cultures represented truthfully on screen.  But they also need to see a world where kids go through regular, every-day problems that are shared human experiences transcending cultural barriers.  Sure, Dora the Explorer could have been a Caucasian character (with impressive Spanish-speaking skills), successfully teaching children basic educational concepts.  But by the same token, Harry Potter could have been an African-American character too.  His character trajectory as depicted by J.K. Rowling would have been essentially the same, and yet one little boy or girl out there might have been impacted in seeing this regular, ordinary kid look a little more like them. I’m not advocating for diversity for diversity’s sake without thoughtful look at how all ethnic backgrounds are depicted in entertainment.  And I realize I’m making a bit of a broad strokes statement by claiming that characters with diverse backgrounds can be swapped around like stand-ins in a school play (or that Harry Potter wasn’t, in my mind, a fantastic character just as Rowling depicted him).  It’s certainly much more complicated than that.

But I do think it’s important to remember and to consider that, as a publishing community, we are providing for future generations with a road map of our culture through the literature we offer the world.  Don’t we want that world, even in the most mundane interactions and even in the most broad-reaching story lines, to reflect the fascinating, and diverse world it’s become?