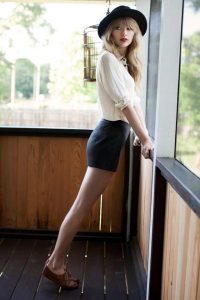 New York, NY — Scholastic, the world’s largest publisher and distributor of children’s books will present an exclusive video featuring an inspiring, personal conversation withTaylor Swift the global superstar and seven-time Grammy® winner about how reading and writing can open a world of possibilities for children. Taylor will also share with young viewers the books that have most influenced her and a never before seen clip from behind the scenes at one of her recent music videos.

As part of Scholastic’s new reading initiative, “Open a World of Possible,” the 30-minute exclusive video will air on Scholastic.com beginning on October 29, 2014, at 1 p.m. ET/10 a.m. PT.Registration to watch on 10/29 is open now at http://www.scholastic.com/taylorswift.

In a nod to her multi-week No. 1 international smash hit single, “Shake It Off,” Taylor will discuss how music helps her shake off the tough moments in life.  Following the video, students can enterScholastic’s “This is How I Shake it Off” writing contest* for the chance to win tickets and a meet-and-greet for two at an upcoming Taylor Swift concert, along with accompanying flights and accommodations. Additional prizes for runners up include a signed guitar and signed copies of Taylor’s new “1989” CD. Students in grades 3-8 attending a U.S. school can enter the contest by submitting a one-page creative essay or poem about how they shake off mean comments and hard times. More details, Official Rules and the contest entry form can be found at: www.scholastic.com/taylorswift. *NO PURCHASE NECESSARY. Enter by December 11, 2014. Void where prohibited.

October is National Bullying Prevention Month, a great time to approach the subject of bullying with kids.  In support of this observance and the video with Taylor, Scholastic has curated a collection of resources that address bullying, building resilience and fostering a love of reading in kids:

Through the ongoing Open a World of Possible initiative, Scholastic has begun a conversation for teachers, parents and children to share ideas and advice about simple ways to incorporate independent reading into busy classroom days and family time. Scholastic invites people to continue joining the conversation and connecting with peers on social media channels using the hashtag #SharePossible.

For more about Scholastic, visit our Mediaroom at:  http://mediaroom.scholastic.com.

About Open a World of Possible

Open a World of Possible is a new reading initiative and campaign that reaches out to teachers, parents and children across all of Scholastic’s books, magazines, websites, instructional materials, consulting, customer service and delivery systems serving almost all of the schools and families in the United States and many more throughout the world.  For more information, please visit:http://www.scholastic.com/worldofpossible/.

Taylor Swift, who writes all of her own songs, is a global superstar, seven-time GRAMMY winner and the youngest winner in history of the music industry’s highest honor, the GRAMMY Award for Album of the Year. She is the first artist since the Beatles (and the only female artist in history) to log six or more weeks at #1 with three consecutive studio albums. Taylor has an album on Rolling Stone’s prestigious The 50 Greatest Albums of All Time (by women) list, Time magazine has named her one the of the 100 Most Influential People in the world, and she is Billboard’s youngest-ever Woman of the Year and the only artist to have been awarded this honor twice. Taylor has career record sales in excess of 30 million albums and almost 80 million song downloads worldwide, and has had singles top both the pop and country radio charts around the globe. Taylor’s album RED, released almost two years ago on Big Machine Records, has sold more than 6 million copies worldwide to date, including more than 1.2 million copies in the U.S. in its first week, scoring the highest first-week sales debut of any album in over a decade. Taylor is the only female artist in music history (and just the fourth artist ever) to twice have an album (2010’s Speak Now and 2012’s RED) hit the 1 million plus first-week sales figure. ”Shake It Off” is the first single off her fifth studio album 1989 (Big Machine Records), which will be released on October 27, 2014. The single has topped Billboard’s Pop, HotAC and Hot 100 charts and has already earned double Platinum-status by the RIAA for exceeding sales of two million downloads.