‘The Guardian’ Unveils An Unpublished Chapter From ‘Charlie & The Chocolate Factory’ 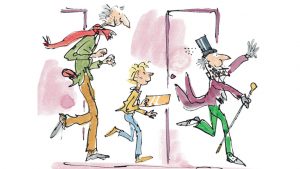 The chapter, entitled “Fudge Mountain,” can be found in an early draft of Dahl’s beloved children’s book. Sir Quentin Blake, the famed artist, created new illustrations for this monumental unveiling. (The Guardian)

“In the chapter Charlie Bucket – accompanied by his mother, not his sprightly grandfather – and the other children are led into the Vanilla Fudge Room, where they face the sinister prospect of the Pounding and Cutting Room…The chapter reveals the original larger cast of characters, and their fates, as well as the original names of some of those who survived into later drafts. Dahl originally intended to send Charlie into the chocolate factory with eight other children, but the number was slimmed down to four. The narrator reveals that a girl called Miranda Grope has already vanished into the chocolate river with Augustus Pottle: she is gone for ever, but the greedy boy was reincarnated as Augustus Gloop.” (The Guardian)