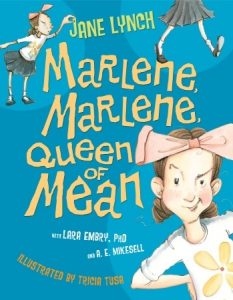 Marlene, Marlene, Queen of Mean is written in verse and aimed at readers ages 3 to 7. Random House Children’s Books will release it on September 23, 2014.

“In the story, Marlene is the self-appointed queen of the playground, the sidewalk, and the school. She is small but mighty . . . intimidating! Known for her cruel ways, the little Queen of Mean has kids cowering in fear-until big Freddy stands up to her and says what everyone has been too fearful to say.” (USA Today)