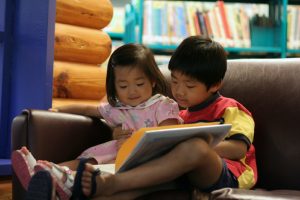 At the beginning of 2014, the Diversity Committee finished its first meeting of the year with answering the questions “How do we want to move forward?” and “What perspectives haven’t we covered on the blog just yet?” After discussing some of the interesting high points of 2013, one aspect kept sticking out.

The term “actual” is important here because we’re referring to hearing kids’ and teens’ opinions, not their “collective” opinions through librarians and teachers—the adults in their lives with which publishers are more likely to communicate.

We all know that kids have opinions, and they are very honest about them, so the Committee wanted to find a way to give the youth of our nation a way to speak up about the diversity in the literature they see, what they want more of, and what they want to change.

Serendipitously, Rebecca Lallier, M.Ed., the School Counselor for the Dothan Brook School in Vermont found the Children’s Book Council and presented a project she facilitated with the school’s 5th graders. Here’s the project in Rebecca’s words:

In the late winter of 2014, 5th graders at the Dothan Brook School in White River Junction, Vermont completed a unit on implicit racism during their classroom counseling lessons. As a culminating activity, students replicated a 2012 study by the Cooperative Children’s Book Center at the University of Wisconsin by collecting data about the race of main characters in children’s fiction picture books in the school library’s collection. A subgroup of students also collected data about the race of children featured on Kindergarten Second Step cards. They compared the data they had collected with the results of the CCBC 2012 study and data about children and race from the 2010 U.S. Census. Using this data and the information that they had learned about implicit racism, the fifth graders wrote letters to decision-­‐makers (their choice of the school principal, district superintendent, the Vermont Agency of Education, or book publishers) outlining the issues they had uncovered and making recommendations for addressing these issues.

Dothan Brook School is a small, rural school of 263 kids that is socioeconomically and ability diverse with a variety of family structures. That being said, the school’s racial/ethnic diversity is very small.

Most of the kids who are racial/ethnic minorities have White/Caucasian parents, and all of the staff is White/Caucasian. These numbers are very representative of Vermont, where 95.2% of the population is in the racial majority.

The project fits perfectly with the CBC’s goal of sharing young readers’ thoughts about diversity in children’s literature with the world and what perfect timing to do this before the next school year unfolds.

For the month of August, we’ll be sharing every letter the 46 5th graders at the Dothan Brook School wrote to decision-makers about the diversity they encountered during their unit and their thoughtful suggestions for change.

We hope you’ll share their letters, too, so that their opinions on the reading material created for them might make a difference as well as show other kids that their thoughts and ideas matter and deserve to be heard.