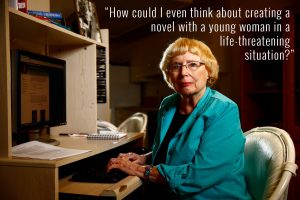 “For two decades, [Duncan] had turned out a thriller nearly every other year; now, she was struggling to complete what would be her last, Gallow’s Hill, and her work was drifting further and further from what she was once known for. She wrote a book about experiments in extrasensory perception called Psychic Connections. She wrote a book about her photographer father’s trove of circus photos. There was a good reason the genre had become so difficult for her: the unsolved killing of her youngest daughter, Kaitlyn, in the summer of 1989. ‘I went weak after Kait’s murder,’ Lois said. ‘How could I even think about creating a novel with a young woman in a life-threatening situation?'”