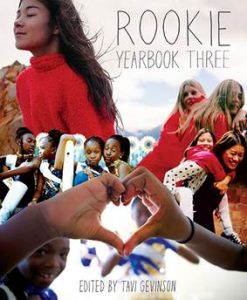 New York, NY – Tavi Gevinson, editor-in-chief and founder of Rookie, revealed the cover of  Rookie Yearbook 3 and announced the contributors to the jumbo, full-color compendium today. Featuring the best of rookiemag.com from the previous year, this exclusive-to-print content will include entries from Haim, Lorde, Shailene Woodley, Sia, Elle and Dakota Fanning and more. Rookie Yearbook 3 will be published by Razorbill, an imprint of Penguin Young Readers Group, on October 21, 2014.

Tavi Gevinson is the editor-in-chief and founder of Rookie. Tavi’s career in media began when she created the style blog thestylerookie.com in 2008, when she was 11. In 2011, at 15, Tavi launched Rookie, an online magazine for teenage girls. Six days after its debut, Rookie received more than one million pageviews. Tavi has since spoken at TEDxTeen, theEconomist‘s The World in 2011, and the Sydney Opera House. Lady Gaga has called her “the future of journalism.” Tavi is a high school student in Oak Park, Illinois.

Razorbill is an imprint of Penguin Young Readers Group. Titles include the #1 New York Times bestseller Thirteen Reasons Why by Jay Asher, which celebrated its sixth year on the bestsellers list this fall with more than 1.5 million copies in print, the international #1 bestselling Vampire Academy series and the New York Times bestselling Bloodlines series, both by Richelle Mead, and Marcel the Shell With Shoes On: Things About Me, the bestselling picture book by Jenny Slate and Dean Fleischer-Camp. Razorbill’s non-fiction titles include theNew York Times bestsellers Classy by Derek Blasberg and The Teen Vogue Handbook: An Insider’s Guide to Careers in the Fashion Industry, as well as Influence by Mary-Kate Olsen and Ashley Olsen, the cookbook The Real Girl’s Kitchen by Haylie Duff and many other award-winning and bestselling titles.