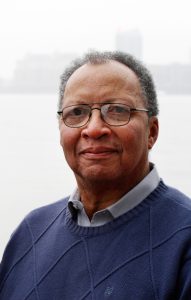 In a career spanning over 45 years, Walter Dean Myers wrote more than 100 books for children of all ages. His impressive body of work includes two Newbery Honor Books, three National Book Award Finalists, and six Coretta Scott King Award/Honor-winning books. He was the winner of the first-ever Michael L. Printz Award, the first recipient of the Coretta Scott King-Virginia Hamilton Award for Lifetime Achievement, and a recipient of the Margaret A. Edwards Award for lifetime achievement in writing for young adults. In 2010, Walter was the United States nominee for the Hans Christian Andersen Award, and in 2012 he was appointed the National Ambassador for Young People’s Literature, serving a two-year tenure in the position. Also in 2012, Walter was recognized as an inaugural NYC Literary Honoree, an honor given by former New York City Mayor Michael Bloomberg, for his substantial lifetime accomplishments and contribution to children’s literature.

“We are deeply saddened by the passing of erudite and beloved author Walter Dean Myers. Walter’s many award-winning books do not shy away from the sometimes gritty truth of growing up. He wrote books for the reader he once was, books he wanted to read when he was a teen. He wrote with heart and he spoke to teens in a language they understood. For these reasons, and more, his work will live on for a long, long time,” said Susan Katz, President and Publisher of HarperCollins Children’s Books.

West Virginia. Walter’s birth mother, Mary Myers, died after the birth of his younger sister, Imogene. His father, George, sent Walter to live with his first wife, Florence Dean, and her husband, Herbert Dean, in Harlem, along with Florence and George’s two daughters. Walter would eventually adopt the middle name “Dean” to honor Florence and Herbert.

In Walter’s memoir, Bad Boy, he wrote, “Harlem is the first place called ‘home’ that I can remember.” This sentiment is reflected in Walter’s writing, whether via a love letter to the neighborhood in the picture book Harlem; a story of a boy’s trial for a crime committed in Harlem, in the novel Monster; or the tale of two friends struggling to see a future beyond the community they know in the novel Darius & Twig. Walter spent much of his childhood playing basketball on the courts of Harlem and checking books out of the George Bruce Branch of the New York Public Library. Florence Dean taught Walter to read in their kitchen, and when he began attending Public School 125, he could read at a second-grade level. Though Walter struggled through school with a speech impediment and poor grades, and he had trouble with discipline throughout his school career, he remained an avid reader. His love of reading soon progressed to a love of writing.

Walter wrote well in high school and one teacher, who recognized his talent but also knew he was going to drop out, told him to keep on writing, no matter what—“It’s what you do,” she said. Walter did drop out of Stuyvesant High School, though they now claim him as a graduate (which Walter always found funny). At the age of seventeen, he enlisted in the Army. Years later, after his safe return home and while working a construction job, Walter would remember this teacher’s advice. He started writing again…and he didn’t stop.

Walter’s body of work includes picture books, novels for teens, poetry, and non-fiction alike. In 1968, Walter’s first published book, Where Does the Day Go?, illustrated by Leo Carty, won an award from the Council on Interracial Books for Children. Walter and his son Christopher, an artist, collaborated on a number of picture books for young readers, including We Are America: A Tribute from the Heart and Harlem, which received a Caldecott Honor Award, as well as the teen novel and National Book Award Finalist Autobiography of My Dead Brother, which Christopher illustrated. Walter’s novel Scorpions won a Newbery Honor Medal and the Margaret A. Edwards Award, while gritty teen novels Lockdown and Monster were both National Book Award Finalists. Monster appeared on the New York Times bestseller list, won the first Michael L. Printz Award, and received a Coretta Scott King Honor Award. His stunning Coretta Scott King Award-winning novel, Fallen Angels (1988), about the Vietnam War, was named one of the top ten American Library Association Best Books for Young Adults of all time. Twenty years later, Myers wrote a riveting contemporary companion novel, Sunrise Over Fallujah, which was named a New York Times Notable Book in 2008.

In Invasion (2010), Myers once again explored the effects and horrors of war through young protagonists, this time set in World War II. His upcoming books include Juba!, (HarperCollins, April 2015) a novel for teens based on the life of a young African American dancer, and On a Clear Day (Crown/Random House Books for Young Readers, September 2014). A graphic novel adaptation of Monster (HarperCollins) is also forthcoming.

Walter often wrote books about the most difficult time in his own life—his teenage years—for the reader he once was; these were the books that he wished were available when he was that age. Throughout his life, Walter worked to make sure young adults had the tools necessary to become hungry readers, thirsty learners, and, therefore, successful adults. He frequently met with incarcerated teens in juvenile detention centers and received countless letters thanking him for his inspirational words. Walter also worked with and mentored teenage fan and writer Ross Workman, and they published the novel Kick together. As the National Ambassador for Young People’s Literature from 2012-2013, Walter traveled around the United States promoting the slogan “Reading is not optional.” He strove to spread the message that a brighter future depends on reading proficiency and widespread literacy, not only during his two-year tenure as National Ambassador, but beyond. More than anything, Walter pushed for his stories to teach children and teenagers never to give up on life.

“Walter Dean Myers was a compassionate, wonderful, and brilliant man.  He wrote about children who needed a voice and their stories told.  His work will live on for generations to come.  It was an honor to work with him for so many years,” said Miriam Altshuler, Walter’s literary agent.

Walter lived in Jersey City, New Jersey, with his wife Constance. He is survived by Constance, as well as his two sons, Christopher and Michael Dean. He was predeceased by his daughter, Karen.