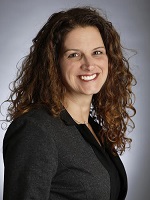 New York, NY ­­— Scholastic (NASDAQ: SCHL), the global children’s publishing, education and media company, today announced the appointment of Stacy Lellos as Senior Vice President and General Manager for Klutz, the popular “books-plus” brand from Scholastic. Reporting to Ellie Berger, President of Scholastic Trade Publishing, Lellos will carry on the great Klutz tradition of innovation, quality, creativity, and fun that has defined the brand for decades. Lellos, who has been VP of Marketing at Toys R Us since 2013, returns to Scholastic where she has held a variety of publishing and marketing positions since 2000, most recently as Vice President of Marketing and Multi-Platform Publishing for the Trade division. Based out of Scholastic Headquarters in New York, Lellos will build a creative team and be responsible for all aspects of the Klutz brand and publishing program.

Stacy Lellos originally joined Scholastic in 2000 as Senior Brand Manager and soon became Director, Brand Management and Retail Marketing.  She led the strategic direction for the management and marketing of the Harry Potter series across the company from 2000 to 2006 and drove cross-divisional promotions for other large franchises.  In 2006, Lellos added responsibility for licensed publishing, before briefly leaving Scholastic.

“With her deep knowledge of Scholastic, as well as her recent experience at Toys R Us, Stacy brings boundless energy, a wealth of creative ideas, vast marketing experience, and a passion to her work,” said Ellie Berger.  “I am confident that the Klutz brand will grow and thrive under her leadership.”

“I am thrilled to return to Scholastic to lead Klutz,” said Stacy Lellos.  “Klutz uniquely inspires kids of all ages to tap into the creativity that lies within each of them, and I am excited to continue the proud tradition of creating innovative products that foster kids’ imagination.”

Founded in 1977, Klutz has been engaging kids for more than 35 years with more than 100 million activity products in print, including such popular products as Cat’s Cradle®, Face Painting, Friendship Bracelets, Juggling for the Complete Klutz, and The Klutz Book of Paper Airplanes. Today, more than 175 Klutz® products are sold in book, toy and gift stores worldwide, and the company has helped kids launch more than 40 million paper airplanes, knot 48 million friendship bracelets, and drop more than 8 million juggling cubes. Klutz is an imprint of Scholastic.