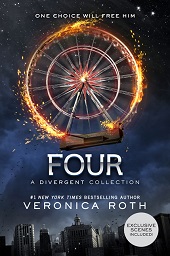 NEW YORK, NY — With more than 22 million copies sold worldwide, the DIVERGENT trilogy has become a major pop culture phenomenon that was propelled even further into the zeitgeist by the recent release of the Divergent film starring Shailene Woodley, Theo James, and Academy Award-winner Kate Winslet which debuted on March 21and has grossed over $265 million worldwide. Now fans have the chance to see #1 New York Times bestselling author Veronica Roth as she visits bookstores across the country to celebrate the release of her next full-length book. Four: A Divergent Collection, a compilation of four short stories set in the Divergent world but told from the perspective of Tobias “Four”Eaton, will be released on July 8 from Katherine Tegen Books, an imprint of HarperCollins. Included in the Four hardcover are three exclusive scenes that give readers a 360 degree view of poignant and memorable moments in Divergent.

Roth will embark on a FOUR-City National Tour with a kick-off solo event in Boston, MA and will later be joined by fellow authorsMarie Lu (Legend series), Margaret Stohl (Beautiful Creatures & Icons series), and Phoebe North (Starglass) in Atlanta, GA,Denver, CO and Lansing, MI respectively. “I am a big fan of all of these authors,” says Roth, “And I’m so excited for my fans to hear from them and discover amazing new books.” Veronica Roth was a voracious reader as a teen and is committed to inspiring young people to read. For every ticket sold for admission to Veronica Roth’s FOUR-City National Tour, a brand-new, high-quality book will be donated to a child in need through First Book. In addition to the FOUR-City National Tour, Veronica Roth will be attending San Diego Comic Con International.