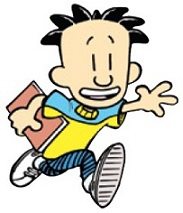 NEW YORK, NY — Lincoln Peirce and HarperCollins Children’s Books have officially broken the Guinness World Records® title for the world’s longest cartoon strip by a team. The record was broken live on TODAY show in New York City, and was the culmination of a week-long record breaking series. The record breaking comic spans 3,983 feet, 2 inches or longer than 11 football fields.

In a year-long campaign to celebrate the 6th book in the Big Nate series, BIG NATE: IN THE ZONE, HarperCollins, along with booksellers, educators, and students from 100 schools in 30 states and 7 countries contributed to the 1,202 panels that make up the world’s longest comic strip.  The comic is an adaptation from the first two Big Nate books, BIG NATE: IN A CLASS BY HIMSELF and BIG NATE STRIKES AGAIN.

BIG NATE is the wildly popular tween series that has received rave reviews, including this one from Diary of a Wimpy Kid authorJeff Kinney:  “Big Nate is funny, big time!” In March 2010, Big Nate caught the attention of millions of tweens with BIG NATE: IN A CLASS BY HIMSELF, the first installment in a hilarious 16-book series based on cartoonist Lincoln Peirce’s popular comic strip.  In BIG NATE: IN THE ZONE, things aren’t going well for Nate: Gina is being her usual know-it-all self, Artur and Jenny are going overboard with PDOs (Public Displays of Obnoxiousness), and worst of all, it’s report card time. Then, miraculously, Nate’s luck takes a turn for the better, and he’s in the zone – he’s unexpectedly freed from detention, and his band gets to play in the school assembly. He’s never had a hot streak like this before.  The question is:  How long will it last?

Since the series launch, BIG NATE has more than 6 million books in print, over 10 million visits to bignatebooks.com, 109 weeks on the New York Times bestseller list, and 25 foreign language licenses. The BIG NATE novels are also available as e-books on the Apple iBooks Store for iPhone, iPad, and iPod touch, the Nook Book Store, and the Kindle Fire. Readers can continue the Big Nate experience with the BIG NATE: COMIX BY U! interactive app, available at the App store.

In May 2013, BIG NATE made his theatrical debut in BIG NATE: THE MUSICAL at Adventure Theatre MTC in Glen Echo, Maryland. Adventure Theatre MTC, under the direction of Michael J. Bobbitt, is one of America’s leading professional children’s theatres and training academies. The musical will begin touring in fall 2014 to approximately 25 markets, and the show is already confirmed to do 20 performances for audiences of 500 at the Todd Wehr Theater in February/March 2015.

ABOUT LINCOLN PEIRCE
Lincoln Peirce (pronounced “purse”) is a cartoonist/writer and New York Times bestselling author of the hilarious Big Nate book series. Peirce is also the creator of the comic strip Big Nate, which debuted in 1991 and appears in more than 300 U.S. newspapers and online daily at www.gocomics.com.  Big Nate is featured on the phenomenally popular websitewww.poptropica.com, where kids have logged onto the Big Nate Island 44.2 million times since Big Nate appeared on Poptropica map in 2009.

Lincoln’s boyhood idol was Charles Schulz of Peanuts fame, but his main inspiration for Big Nate has always been his own experience as a sixth grader. Just like Nate, Lincoln loves comics, ice hockey, and Cheez Doodles (and dislikes cats, figure skating, and egg salad). His Big Nate books have been featured on Good Morning America and in the Boston Globe, the Los Angeles Times, USA Today, and the Washington Post. He has written for Cartoon Network and Nickelodeon, and enjoys visiting schools and speaking to students about cartooning and storytelling.  Lincoln Peirce grew up in Durham, New Hampshire and attended Colby College in Maine before moving to New York City to study at Brooklyn College.  After three years spent as a high school art teacher, he became a full-time cartoonist.  He and his wife live in Portland, Maine, and have two children.  You can visit him online at www.bignatebooks.com, where Lincoln blogs twice a week.