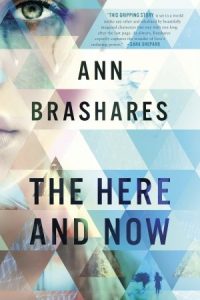 NEW YORK, NY — The original queen of YA literature and author of the internationally bestselling Sisterhood of the Traveling Pants series Ann Brashares is back on the teen scene with her biggest novel yet— THE HERE AND NOW.

In honor of the book’s release on Tuesday, April 8, 2014, Brashares and friend Ana Gasteyer, of Saturday Night Live and Suburgatory fame, team up for a comedic video.

Brashares started a cultural phenomenon with the Sisterhood of the Traveling Pants series, which began in 2001, produced two major motion picture adaptations, and has sold over 8 million copies.

In THE HERE AND NOW, an epic romantic thriller, Brashares enters a whole new world while still capturing the teen voice and heart in the way we have come to know and love from her. This is the story of seventeen-year-old Prenna James, who immigrated to New York when she was twelve. Except Prenna didn’t come from a different country. She came from a different time in which the world has been left in ruins. Prenna and the others who escaped to the present day must follow a strict set of rules, and she does as she’s told, believing she can help prevent the plague that will one day ravage the earth and stop humanity’s destruction. But everything changes when Prenna falls for Ethan Jarves.

Ann Brashares is the #1 New York Times bestselling author of the Sisterhood of the Traveling Pants series, 3 Willows, The Last Summer (of You & Me), and My Name Is Memory. She lives in New York City with her husband and their four children. Discover more about Ann on AnnBrasharesBooks.com. Follow her on Twitter @AnnBrashares with #hereandnow.

Ana Gasteyer is best known for her work on Saturday Night Live. During her six year stint, she created some of the most famous characters including Bobbie Moughan-Culp, NPR radio host Margaret Jo, and Lilith Fair poetess Cinder Calhoun among many others. Ana can currently be seen as “Sheila Shay” on ABC’s hit comedy Suburgatory. Discover more about Ana on AnaGasteyerinConcert.com. Follow her on Twitter @AnaGasteyer.