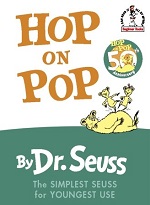 “The Toronto Library system did not submit to the complainant’s belly aching. The book remains in circulation in part because the children in the book are, in fact, told not to hop on Pop. Now is when we’d make jokes about GMO protestors launching a campaign against Green Eggs and Ham…but we don’t want to give anyone any ideas considering it was already banned in China for its “portrayal of early Marxism” and briefly in California for allegedly touting acts of homosexual seduction.”