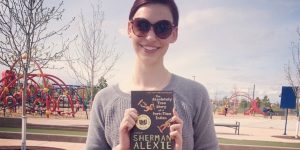 Parents, concerned that teens would read the book without their parents’ permission, called the police to the scene. Still, all but 20 of the 350+ book copies were successfully given away.

Alexie’s publisher, Hachette Book Group, has responded to the students’ campaign by sending Rediscovered Books an additional 350 copies. So if you’re in Meridian, go pick up a free copy.”