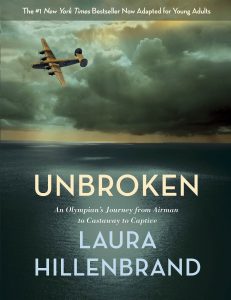 New York, NY, April 17, 2014—Delacorte Press, an imprint of Random House Children’s Books, will publish a young adult adaptation of Laura Hillenbrand’s Unbroken, it was announced today by Barbara Marcus, President and Publisher of Random House Children’s Books.Unbroken: An Olympian’s Journey from Airman to Castaway to Captive will be published on Veterans Day, November 11, 2014, with a first printing of 200,000 copies.

Unbroken tells the story of Olympic runner Louie Zamperini’s breathtaking odyssey during World War II, and the courage, cunning, and fortitude he found to endure and overcome. Since its original publication by Random House in November 2010, Unbroken has sold nearly 4 million copies and has remained on the bestseller list for over 160 weeks, with 14 weeks at #1. A major motion picture based on the book, directed by Angelina Jolie, is set for release on Christmas Day, 2014.

“The saga of a man’s bravery, ingenuity, and unwavering will in the face of almost unimaginable challenges, Louie Zamperini’s story is spellbinding to people of every age,” says Hillenbrand. “At the urging of librarians, teachers, and parents, I’ve created this edition specifically for younger readers. I’m delighted to bring Louie’s inspiring, exhilarating story to a new generation.”

Thoughtfully adapted to a younger audience, lavishly illustrated with more than one hundred photographs, and featuring an exclusive conversation with Hillenbrand and Louie Zamperini, this gripping narrative follows Zamperini’s life through his turbulent Depression-era youth, storied running career, wartime saga as a bombardier, raft-bound castaway, and enslaved prisoner of war, and postwar struggle and redemption.

“We are so fortunate for the opportunity to work with Laura and our adult colleagues here at Random House to bring Unbroken to the young adult market,” says Marcus. “To be part of the team that will continue to share Louie Zamperini’s story—one of the most moving stories of our time—is truly an honor.”

Beverly Horowitz, Vice President, Publisher, Delacorte Press, will edit. Unbroken will be available simultaneously as an ebook and on audio from Listening Library on CD and as a digital download.

About Unbroken: On a May afternoon in 1943, an American military plane crashed into the Pacific Ocean and disappeared, leaving only a spray of debris and a slick of oil, gasoline, and blood. Then, on the ocean surface, a face appeared. It was that of a young lieutenant, the plane’s bombardier, who was struggling to a life raft and pulling himself aboard. So began one of the most extraordinary sagas of the Second World War.

The lieutenant’s name was Louis Zamperini. As a boy he had been a clever delinquent, breaking into houses, brawling, and stealing. As a teenager, he channeled his defiance into running, discovering a supreme talent that carried him to the Berlin Olympics. But when war came, the athlete became an airman, embarking on a journey that led to his doomed flight, a tiny raft, and a drift into the unknown.

Ahead of Zamperini lay thousands of miles of open ocean, leaping sharks, a sinking raft, thirst and starvation, enemy aircraft, and, beyond, a trial even greater. Driven to the limits of endurance, Zamperini would respond to desperation with ingenuity, suffering with hope and humor, brutality with rebellion. His fate, whether triumph or tragedy, would hang on the fraying wire of his will.

Laura Hillenbrand is the author of the #1 New York Times bestsellers Unbroken: A World War II Story of Survival, Resilience, and Redemption, and Seabiscuit: An American Legend, which was a finalist for the National Book Critics Circle Award, won the Book Sense Book of the Year Award and the William Hill Sports Book of the Year Award, landed on more than fifteen best-of-the-year lists, and inspired the film Seabiscuit, which was nominated for seven Academy Awards, including Best Picture. She is serving as a consultant on the Universal Pictures feature film based on Unbroken. Hillenbrand’s New Yorker article “A Sudden Illness” won the 2004 National Magazine Award. Her work has also appeared in such publications as the New York Times, Vanity Fair, the Washington Post, and the Los Angeles Times. She and actor Gary Sinise are the cofounders of Operation International Children, a charity that provides school supplies to children through American troops. http://laurahillenbrandbooks.com/

An Olympian’s Journey from Airman to Castaway to Captive