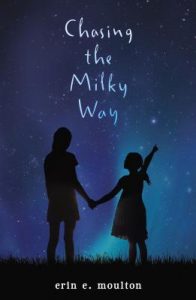 My third book, Chasing the Milky Way, is due out in June. It’s about Lucy Peevey, a young girl who wants to win a robot competition for a cash prize and a college scholarship. She lives with her Mama, little sister, and best friend, Cam, at the Sunnyside Trailer Park. As they get ready to depart for the big weekend, Mama’s in the throes of an episode (Mama has a mixed diagnosis of Bipolar and Schizoaffective disorder), and things get complicated.

When my editor at Philomel, Jill Santopolo, and I started talking about Chasing the Milky Way, I realized that I was aching to discuss the stigma of mental illness. You see, my mom has worked in the mental health field her entire adult life. Growing up, she would take us to work with her at a rehabilitation house, and we had the opportunity to get to know the residents there. One said he was a space cowboy and told me his mind was a thousand years old. One could describe in detail how she knew she was Joan of Arc, reincarnated. One had a few baby dolls that she mothered, bringing them on walks and tending to their daily needs. Another took great pride in the yard work he could do around town, but to live on his own would have been too difficult. He struggled with basic functioning. One only appeared every few months or so when her manic depression (bipolar disorder) got really bad. I’d find her marooned on the sun porch holding a cushion like it was a life raft. Sometimes, she wouldn’t move for hours.

The facility, and the people in it, were quite normal to me. They had good days and bad days, interests, skills and worries. They had family and friends. But it didn’t take me long to realize that some of my classmates at school knew the facility, and were wary of it. They often had stories about what went on there (mostly fashioned by those on the outside, not bothering to look in). It became apparent that some people didn’t think the house should be in the community at all. This was my first brush with stigma. That was growing up in the 80’s and 90’s. The stigma remains in both public and self perceptions.

In a 2011 research article in the Journal of Mental Health Counseling, analysts Bathje and Pryor note that pervasive stereotypes include perceptions that the mentally ill are inherently dangerous, unkempt or disheveled, or somehow responsible for the onset of their illness, leading to common responses of fear, irritation and lack of sympathy. As I was writing, I wanted to make sure that I did not add to this stigma. I found that I had to cull from a variety of sources to make sure that I was creating an accurate, human and non-stereotypical portrayal of the Bipolar experience. I looked to both fiction and nonfiction for help on this subject. After spinning around the web, Novelist, anthologies, and blogs, I found some solid realistic representations of Bipolar Disorder in YA and MG lit to use as mentor titles. Here are two fiction favorites: Though the fiction titles were helpful, I found that I needed to hear real people tell their stories. I needed to get a variety of perspectives. I needed to get my manuscript vetted by someone on the inside. I needed to understand clinical terms. As I mentioned, Mama has a mixed diagnosis of Bipolar and Schizoaffective disorder. I chose to give her a mixed diagnosis because, through my research, it became apparent that diagnosis was difficult, especially when resources were limited or doctors and treatment plans had changed. I found great information in a variety of places:

It seems to me that story immersion is an empathetic endeavor. It is our best chance at simulating an experience which we have never come across in real life. I tried to absorb every last bit of experience from these resources and craft a realistic book that has plenty of plot. I told myself: I am good at empathy. Empathy is what I do. But it doesn’t make me any less nervous to put this book out into the world. I made sure to add an author’s note, resource list and Teacher’s Guide (coming soon), to provide for further discussion of mental illness and stigma in the classroom. In the meantime, perhaps we can start the discussion here?

Before we begin, I would like to clarify the term mental illness to help guide the conversation. Mental illness currently covers the following disorders:

1)      Here’s a biggie: Did you know that 61.5 million Americans will suffer from a mental illness in a given year. 1 out of 4. ¼ of the population (Duckworth, 2013). It seems to me that representation = perception and that accurate representation in our cultural narratives could help combat stigma. Industry Insiders : Do you have a pulse on if realistic works are being written and submitted? More for YA or MG? Are specific disorders explored more than others?

2)      Librarians: Do you find it easy to locate fiction books with mental illness? I found that sometimes books that hadn’t specified a disorder in the description would get an amateur diagnosis from a reader or content creator and would be placed on specific disorder lists. Diagnosis seems hard in reality and fiction. (It reminds me of this article: Pathology in the Hundred Acre Wood: http://www.cmaj.ca/content/163/12/1557.full)

3)      Teachers: Do you feel that you have adequate resources to talk about mental illness in the classroom? Do you think more books with teacher guides could make this subject more accessible? If not, what would make it accessible?

4)      Readers: What are your favorite realistic YA or MG books about mental illness? Did the protagonist suffer from the illness? Secondary character?

5)      Writers: What are your hesitations in writing about mental illness(whether or not you have personally experienced mental illness)? Erin E. Moulton graduated with an MFA in Writing for Children from the Vermont College of Fine Arts. She is the author of Flutter: The Story of Four Sisters and One Incredible Journey (Philomel/Penguin 2011), and Tracing Stars (Philomel/Penguin 2012). Erin is co-founder of the Kinship Writers Association and is currently the YA librarian at the Derry Public Library. Erin lives in Southern New Hampshire with her husband and puppies where she writes, reads, drinks tea and dreams.  You can visit her online at www.erinemoulton.com or on Facebook as Erin E. Moulton (Author), or find her on twitter @erinemoulton.